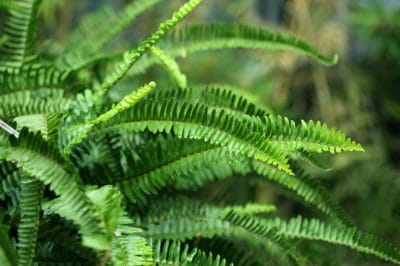 Should I Use Epsom Salt on Boston Ferns?

Epsom salt is used in a variety of gardening situations to help correct mineral deficiencies. When it comes to Boston ferns, Epsom salt is more likely to be used for outdoor than indoor plants, A soil test prior to use is often a good idea and you must use the proper concentration.

The Boston fern is a mutation of a plant known as sword fern and is distinguished from its parent by its gracefully arching leaves. Nephrolepis exaltata ‘Bostoniensis’ is a bright green fern used as a houseplant and also grown outdoors in USDA Zones 8 to 11. Like most ferns, it prefers bright indirect light, high humidity, moderate water and occasional fertilizer.

What is Epsom Salt?

Epsom salt is magnesium sulfate. It acquired the name because it was discovered in Epsom, England. The term salt refers to the crystalline structure, which is similar in appearance to table salt. It is used as a laxative, in beauty products and to soak sore muscles or sprains as well as in the garden. It is readily available in garden stores, groceries and pharmacies.

About Magnesium and Sulfur

Magnesium and sulfur are naturally occurring minerals. Both are required for good plant growth, although in lesser quantities than the so-called “Big Three” of nitrogen, potassium and phosphorus. Magnesium is one of the building blocks plants use to make chlorophyll, the substance that makes them green. Sulfur is also used in making chlorophyll and to help a plant produce amino acids, protein, enzymes and vitamins.

While Epsom salt doesn’t usually cause problems, a soil test can help determine if it’s necessary for Boston ferns. A soil test can:

Ferns are sensitive to fertilizer, especially if used in excess. The mineral salts in fertilizers can also build up in the soil. However, sometimes minerals are bound in the soil and not available, so the right fertilizer makes a difference. Magnesium helps release iron so the plant can use it. Soil bacteria need sulfur for various processes that promote plant growth.

To Use Epsom Salt

Ferns grown indoors may not need Epsom salt, but if the foliage turns yellow or lower fronds turn yellow between the veins, the plant needs sulfur or magnesium, respectively. Mix two tablespoons of Epsom salt in one gallon of slightly warm water. Once dissolved, water the fern. Don’t splash the foliage and only use in the active growth season.