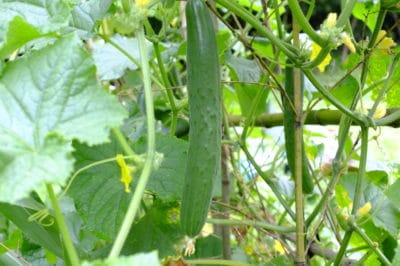 Caring for Cukes: All about Cucumber Worms

Simply put, once worms find your cucumber patch, your crop can go from bumper to bust in nearly no time. Your best chance of defeating these cuke-devouring caterpillars comes with smart preventive measures.

At barely 1 inch across, pickleworm and melonworm moths would be hard to spot in broad daylight. But the heat-loving insects visit at night to deposit microscopic yellow eggs on on your cuke plants. In about four days, spotted white picklemoth or colorless melonmoth caterpillars emerge. As the pests feed and mature, their color deepens to yellowish-green.

Pickleworms start feeding on your cucumbers by tunneling into the flowers, often eating enough to seriously decrease your harvest. They bore into the fruit next, hollowing out the core and leaving mounds of soft, cloudy-white white excrement in their wake. Pickleworms typically target fruit before the rind has hardened.

Melonworms favor cucumber leaves over fruit and devour them down to the veins. They attack fruit only when their leaf supply is exhausted. The caterpillars usually feed on cucumber rinds and only rarely bore into the flesh. Even so, the defoliation they cause can severely reduce your harvest.

After feeding, the caterpillars pupate inside leaf folds. Pickleworms cover themselves with leaf debris while melonworms spin white cocoons. They emerge to lay eggs as iridescent, brown and yellow pickleworm or black and white melonworm moths. The cycle repeats up to four times a year, but only caterpillars in subtropical climates make it through the winter.

Cucumber worm control is a season-long effort, beginning before the first moths arrive in spring. The good news is that, with the right control techniques, you’ll also discourage several other cucumber pests without harmful chemicals. They include:

The earliest time to plant cucumbers safely is when the soil temperature reaches 65°F (18.3°C). Unless you live in an area where the caterpillars survive the winter, get your cukes into the ground as soon as that happens. Early ripening crops seldom have serious worm damage.

Cleanliness in the Cuke Patch

If you’re in a warm-winter climate, late-season caterpillars infesting your cukes might survive the winter. To protect your next season’s crop, remove and destroy the current one after harvesting what you can. Also, remove any nearby weeds that might be harboring the pests.

Protecting Your Cukes with Row Covers

To keep pickleworms and melonworms moths off your crop, drape your cucumber bed with a fabric row cover immediately after planting. The seedlings lift the nearly weightless cover as they grow and the porous fabric allows sun, air and rain in while keeping pests out. Anchor the cover in place with rocks or soil so crawling pests can;t sneak under it.

Expert gardener’s tip: Once the plants begin to flower, lift the cover during the day so bees can pollinate the plants. Replace it before sunset, when the moths become active.

A pair of tweezers and a bowl of soapy water make quick work of any stray worms you find on your cuke flowers, vines and leaves.