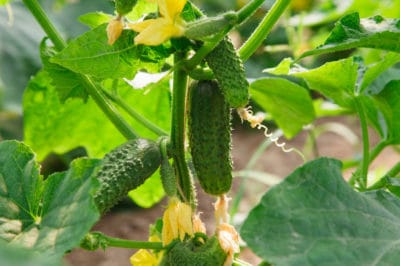 It happened in no time. Your cucumber vine leaves suddenly went from large and lush to wilted and shriveled. For an idea of what’s causing the problem and whether or not it’s fixable, keep reading.

Like Goldilocks and porridge, cucumbers don’t like it too hot. Specifically, cuke leaves wilt from heat stress at temperatures above 85°F (29.4°C). Drying winds make the problem worse, because the large leaves lose more moisture than the roots can replace.

To prevent heat-related wilt, give your cucumbers 1 inch of water per week when temperatures are below 85°F (29.4°C). That equates to 6 gallons for every 10 square feet of soil. When it’s hotter, or during prolonged dry spells, increase that to 2 inches per week.

Expert gardener’s tip: A 2- to 3-inch layer of organic mulch spread beneath and around your cukes helps keep the soil moist and nourished.

Expert gardener’s tip: To test for bacterial wilt disease, cut through a stem of a wilted vine near its base with a sharp knife. Rub the cut ends together and pull them apart. If it’s wilt disease, a thread of bacterial slime will ooze from the wound.

Remove the infected plant; it can’t be saved. Replace it with a burpless or non-bitter cuke variety that cucumber beetles will ignore such as:

Although much less of a threat than cucumber beetles, squash vine borer larvae occasionally tunnel their way through cuke vines, leaving wilted leaves in their wake. Adult borers are wasplike moths about 1/2-inch long with black-spotted, orange abdomens. In early to mid-summer, they lay eggs at the base of the vines, A week later, their larvae begin tunneling.

For organic borer prevention, sprinkle the soil around your seedlings with food-grade diatomaceous earth. It dehydrates and kills borer larvae. Make the first application in late spring and reapply as needed until you’ve harvested your cukes.