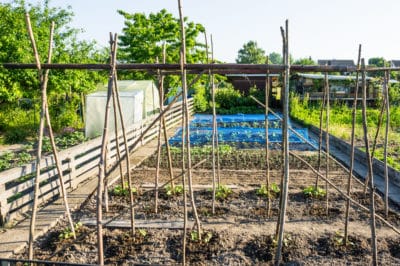 Advantages of a Pole Bean Teepee

If you're going to grow pole beans for food or as ornamentals, there's no getting around it – they will need supports for their vines. The classic support is to allow them to twine up cornstalks, as Native Americans did in the Three Sisters configuration. While there are other options, the pole bean teepee has some definite advantages.

Pole beans are heavy – more so when wet. Many forms of bean supports need posts sunk into the ground to support the weight of the trellis as well as the beans. Setting the post is usually the most labor-intensive part of creating a support system. A bean teepee, however, rests on top of the soil. Its shape provides the necessary support.

Bean teepees rarely cost much money. You can use saplings or poles from trees you have trimmed or from a nearby woodlot. Even if you buy one-inch poles or bamboo, your cash outlay is minimal. Salvaged wire, string or twine work well for lashing the poles together. The low cost means you can erect lots of teepees or add additional poles to each teepee rather than the traditional three.

Constructing a bean teepee is simplicity itself – no carpentry or other specialized skill required. Hand tools can be used to cut or trim the poles to length. Lay the poles on the ground and take several wraps of string, wire or twine around them, about four inches from the top. Stand the teepee up and spread the legs to stabilize it.

Unlike a permanent trellis, a teepee can be moved anywhere in the garden. Since beans should be rotated from year to year, portability is a definite assets. At the end of the season, strip off the dried bean vines and add them to the compost pile. Remove the twine, string or wire and store the poles in a dry area. You may be able to use them for several years at least.

Beans for a Teepee

Although almost any pole bean can be used for a bean teepee, the classics are usually green or snap bean varieties. Here are some good choices:

In addition to the other advantages of growing pole beans in teepees, don’t overlook their value to children. A green bean teepee can be a shady place for kids to curl up with a book or otherwise occupy themselves while parents are in the garden. Make sure the beans for this teepee are edible varieties.