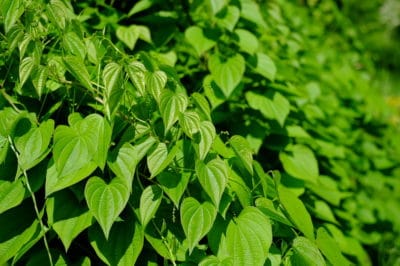 Why Bean Leaves are Important

Beans are a staple in most vegetable gardens. While most people think only of the beans themselves, bean leaves offer a number of benefits. For a start, they're edible. They also provide lots of material for a compost pile and when trellised can provide summer shade. They may even repel bedbugs.

At least 40,000 different beans have been identified. They include fava beans, which are a cool-season plant. Other types of beans include the tepary bean, which is adapted to desert conditions. Lima beans are another form. Runner beans and hyacinth beans are less common but readily available forms of beans. Often used in ornamental planting, they are edible. Beans come in bush, half runner and pole forms.

You have many options when choosing beans:

How to Grow Bean Leaves

Bean leaves are grown as you would grow beans in general. Beans prefer well-drained fertile soil that is not too high in nitrogen. Plant bean seeds about four inches apart two weeks after the last frost date (favas can be planted at the same time as peas). Provide at least one inch of water per week. Don’t work with plants when they are wet – it may spread disease.

Pole beans are vines that can grow as much as 10 feet in length and must be trellised. Each vine is covered with large, heart-shaped or sword-shaped leaves. In addition to the common garden bean, vine forms include runner beans, hyacinth beans and winged beans. All are edible, so they can provide food as well as shade. Runner beans and hyacinth beans also have very showy flowers.

Bean leaves from all types of beans are edible and are used in cooked dishes from many cuisines. The leaves can also be eaten fresh but tend to be overly fibrous for most people. In the Orient leaves from the long bean, Vigna unguiculata, are frequently used in curries, stir fries and soups. The taste is described as similar to arugula with an undertone of citrus. Choose large dark green leaves without spots or holes.

Pole beans and runner beans can provide a quick annual fence. The heavy leaf growth makes a thick screen and can also deaden traffic noise. A temporary fence of chicken wire with posts spaced every five to six feet can provide support. More permanent versions might use chain link. Simply plant the beans along the fence and let them climb it as they grow.

Bedbugs have become an increasing problem in many areas. Difficult to eradicate, they are often resistant to insecticides. Scientists have been examining various folk remedies for solutions. People in the Balkans strewed kidney bean leaves around the bed. In the morning, they removed the leaves as well as the bugs and destroyed both.

How Bean Leaves Work for Bedbugs

The researchers who first studied bean leaves thought that the microscopic hairs on bean leaves trapped the bedbugs by entangling their legs. New research shows that the hairs are actually more like tiny thorns. When the bugs walk on the leaves, they are literally impaled and stick to the leaf surface. The leaves must be fresh to be effective.

Bean leaves are very useful in the compost pile. As a legume, the bean produces its own nitrogen, which increases the nutrient composition of your compost. You can strip the leaves from the vines or simply compost the entire vine after the beans are finished bearing. With bush beans, it’s easier to compost the whole plant.

Yellowed bean leaves can be a sign of soil problems, bacterial or viral infections, or lack of water. Beans grown in alkaline soil are often subject to iron chlorosis, which results in yellowed leaves. Viral and bacterial infections usually show up first as spots on the leaves. The spots spread and the entire leaf becomes brown. Lack of water usually begins with yellowed leaves at the base of the plant.