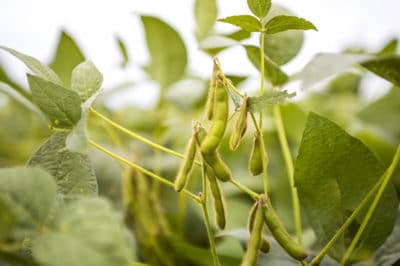 Where Are Most Soybeans Grown?

American farmers and gardeners grow billions of dollars worth of soybeans each year. Soybeans are the second-biggest crop after corn. Many of these beans, however, wind up as animal and poultry food or soybean oil, while the US actually imports most of its the edamame beans people eat, and uses imported beans for foods like tofu and soy milk.

Where Can Soybeans be Grown?

The soybean is a tender, warm-season bush bean with a long growing season. Maturity dates range from 90 to 120 days. The bean does better with adequate water during germination and pod set. Finally, many varieties are daylight sensitive and will not produce well once the days become shorter. These requirements limit soybeans to warmer climates with summer rainfall or irrigation and a relatively dry fall.

Soybeans in the US

Soybeans are available in different varieties, which are used for different purposes. However, the age at which the beans are harvested also affects how they are used. Most American soy is allowed to grow to maturity and the dried beans are processed into soy meal for animal feed or oil. Soy milk is made from rehydrated and pulverized mature dry beans. Few American farmers harvest the immature beans used for edamame.

Although native to Asia and still grown there, most soybeans are grown in the US. In fact, seven of the top 10 soybean producing countries are in the New World. These are:

The remaining heavy producers of soybeans in the world include China, India and the Ukraine.

Soybeans in the US

More than 80 percent of the soybeans grown in the US come from the upper Midwest. Illinois, Iowa, Minnesota and Nebraska are the top four soybean-producing states in the US. Production varied from almost 600,000 bushels (a bushel weighs about 60 pounds) in Illinois to over 300,000 bushels in Nebraska in 2017. Indiana, Missouri, Ohio, North Dakota, South Dakota and Arkansas were other top-producing soybean states.

Soybeans in the Garden

Gardeners, unlike commercial growers, may be able to grow soybeans in states that are not major soybean producers. Given full sun, fertile, well-drained soil and adequate water, soybeans will make a good crop in most gardens. Choose varieties with shorter maturity dates if you live in areas with cold winters and a shorter growing season.

Why Grow Your Own Soybeans?

One of the best reasons to grow soybeans is for edamame. The immature beans are harvested while still tender, and steamed or boiled to be eaten with butter, dipping sauces or just salt. Home-grown edamame, like home-grown corn, is very different from that available at the market. Soybeans also make a good green manure crop and can be plowed or tilled under to enrich the soil.