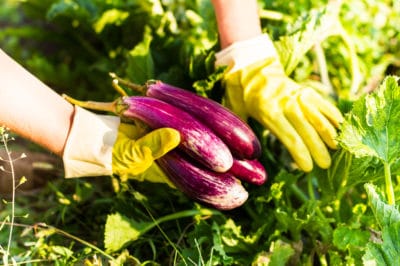 When Is the Best Time to Pick Japanese Eggplant

Ichiban is the most common of the Japanese eggplant varieties. These eggplants have a sweet, mild taste with tender texture and thin skin. Because of the thin skin, you don’t have to peel Japanese eggplant before cooking. They produce dark, purple fruit that grows up to 10 inches long. Ichiban eggplant matures in 50 to 60 days, if grown in full sun.

When Is Japanese Eggplant Ripe?

You’ll know when to pick Japanese eggplant when the skin is glossy and firm. If you press your finger on the outside of the eggplant, it shouldn’t leave an impression. When you pick your eggplants, they should still be young, and only about one-third to two-thirds of the mature size of 10 inches. When picking the ripe fruit, leave the stem attached to prevent air from reaching the pulp. Like a banana, eggplant flesh turns brown when exposed to air.

How to Tell if Japanese Eggplant Is Overripe

If you let your Japanese eggplant grow too large, they become mushy and bitter. Your eggplants are overripe when they display any of the following characteristics:

If any of these symptoms show up on your Japanese eggplants, avoid using them in your recipes. They will taste bitter and spongy. You can save the seeds for planting the following growing season, if you planted a pure eggplant variety.

Since Japanese eggplants are long and slender with thin skin, their shelf life is shorter than other eggplants. It’s best to use them right after picking. If you’re unable to cook them right away, you can store eggplant in the refrigerator for a couple of days. You can also preserve eggplant by freezing it in air tight containers after blanching them in boiling, salted water.