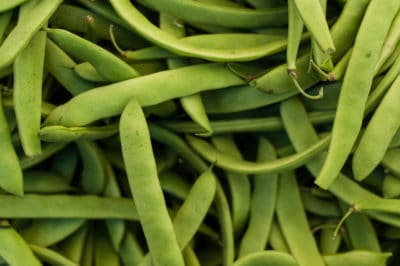 How to String Green Beans

Beans were once grown primarily for their storage qualities to help people get through the winter. However, once people realized the immature green beans could also be cooked and eaten, breeders began to develop beans that did not have strings. Gardeners and cooks appreciated the lower workload, and most modern green beans don't have strings.

At one time, all bean varieties had a tough, fibrous string along the inside center of the bean. This string was dramatically different in texture from the rest of the bean pod and few people found the strings appealing. Cooks would either cut the beans into smaller segments – which still left part of the pod tough – or remove the string entirely.

Beans with strings are usually heirloom varieties, meaning they are at least 100 years old. Some, like the Jumbo Romano, don’t develop strings until the beans are around 10 inches long. Others have strings no matter how young and tender the bean is. Most are also pole varieties, as bush beans were a more recent development and did not become really common until the first part of the 20th century.

Most of these are bush types. Although called green beans, they may also be yellow, purple or streaked. Commonly available:

How to Remove the Strings

Harvest beans that are three to four inches long (some beans can also be harvested when longer). Grasp the stem end of the bean between thumb and forefinger and quickly twist the tip. The bean will “snap,” which is the origin of the other name for these beans. Pull the broken stem end downward to remove the string. Cut or snap off the other end and discard the string.

Other Beans with Strings

In addition to the beans many people call green, snap or string beans, there are other beans with strings. Runner beans, for example, are a pole bean with showy flowers that produces edible beans with distinct strings. Many varieties that are grown for shell beans, such as limas, also have strings. However, the pods of shell beans are discarded, so strings are irrelevant.

A Bit of History

Calvin Keeney is credited with developing many of the stringless bean varieties we eat today. A farmer who grew other produce but specialized in seed production, peas and beans, Keeney developed 19 different varieties of stringless beans between 1888 and 1911. The W. Atlee Burpee seed company released the first of Keeney’s beans in 1894 as the Burpee Stringless Green Pod.