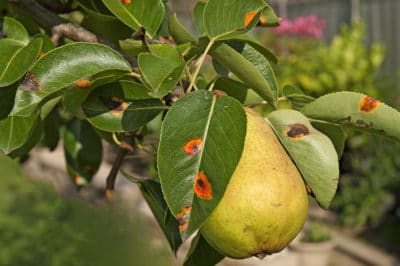 Fruit trees suffer from diseases the same way that humans do. A bacterial virus or fungus infests the tree and impairs its ability to grow and produce healthy fruit. Bacterial infections tend to be the most difficult to deal with often ending in tree removal. It is far easier to prevent disease than to get rid of it.

There are two common bacterial infections associated with pear trees. Fire blight is a bacterium known as Erwinia amylovora. This organism will live through the winter in leaf mulch, fallen fruit, or rotting wood around the base of trees. It tends to infect new shoots first causing them to ooze a clear liquid.

Insects carry the liquid up the tree and spread the bacteria throughout. Before long entire branches begin to look as if they’ve been burned. The leaves brown, blossoms wilt, and fruit falls off prematurely.

Clean and sanitize all pruning tools before using them on your trees. Cut out all affected parts of the tree and burn them. Remove all the mulch from around the base of an affected tree and burn it.

Stony pit is another viral disease that affects pear trees. The exact organism that causes the disease is still unknown. It affects the fruit of pears causing them to become dimpled and unsightly. Like fire blight, the only thing gardeners can do is remove all infected foliage and mulch from the area.

Fungal diseases are more common than bacterial diseases and easier to combat. Some common fungal infections in pear trees include:

If a fungal infection occurs, sanitize all tools used on or around fruit trees. Remove mulch and replace with clean material. Prune the tree to allow for better airflow. Avoid over-watering or allowing the area to get too humid.

Healthy trees get sick less often. Prune your pear trees when they are young to promote strong growth and an open canopy. Keep mulch from ever touching the trunk of the tree. It can be placed around the trunk but not up to it. You may consider using compost instead of straw or leaf mulch in moist environments.

Avoid using high nitrogen fertilizers on pear trees. This causes tons of new unnatural growth and makes them susceptible to infection. Instead, use an active compost to mulch them twice a year.

Finally, there are organic fungicides available at garden supply stores as a last resort. Some gardeners make their own sprays to combat fungus and bacteria.