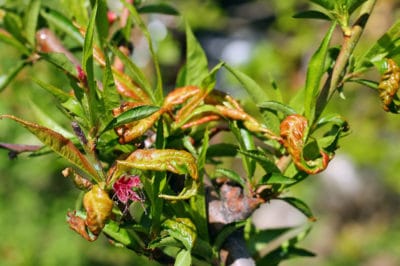 Some of the most common fungal diseases of peach trees are:

Leaf curl is among the most common diseases affecting peach trees. Symptoms show up in deformed and discolored leaves which often later fall from the tree. Spores overwinter in the tree bark and then spread to other parts of the tree with moisture in spring. Spraying the tree when dormant with a copper or sulfur-based fungicide is an effective control.

Anthrancnose is another common fungal pest of peach trees. Also known as crater rot, symptoms include sunken areas on the surface of fruit. Control involves picking up fallen fruit and using a fungicide during the growing season.

Gummosis is a fungal pests which causes blisters and oozing of resin on bark during spring and summer. To reduce the chances of this disease, plant trees in well-drained soil, plant resistant varieties, and cut-out affected wood.

Varnish fungus is a conk producing fungus most common on older, stressed peach trees. The main symptom is a large, shelf-like fungal growth at the base of the tree, however, the organism is damaging to the entire root system. Keep trees growing vigorously to prevent this fungus.

Plant trees in fertile, well-drained soil in a location with plenty of direct sun. Avoid areas where another peach or related tree has recently grown. These planting conditions help prevent fungal diseases from starting in a tree.

Fertilize the tree each year with an application of high-quality compost, aged manure, or a fertilizer mix. A vigorously growing, healthy tree is more resistant to fungal disease problems.

Cut-out diseased wood any time you find it, and prune the trees each year to keep them growing vigorously and fruiting. Keep trees from becoming stressed by watering them thoroughly on a regular schedule during warm weather.