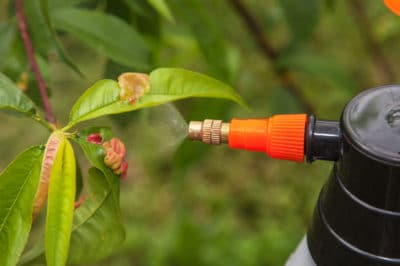 Peach leaf curl is a fungal disease infecting peach trees. This pathogen harms the leaves, weakening the tree and reducing the amount of fruit it produces. Water from rain and irrigation spreads this fungus, and the spores survive the high temperatures and dry conditions of summer. Dormant season spraying, good orchard hygiene, and planting resistant varieties are effective for controlling this problem.

The leaves may remain on the tree or they may fall off with a new set of leaves developing in their place. However, when leaves fall and are replaced, the tree loses energy for fruit production.

The peach tree leaf curl fungus can also spread to twigs and new shoots, causing them to become thick and stunting their growth. Sometimes the fungus also causes fruit to develop cracks and a corky surface.

When temperatures are between 48°and 78°F (8.8° and 25.5°C) and there is moisture from rain, dew, or irrigation, conditions are ideal for the spread and growth of the peach leaf curl fungus. The splashing water moves the spoors from one area of the tree to another during this time.

Symptoms first appear on leaves a few weeks after they bud-out, and additional symptoms show-up on twigs and fruit later in the season. The fungal spoors then fall to the ground where they become dormant through the summer and over winter, resuming their life-cycle the following spring.

One way of controlling this peach tree disease is by planting resistant varieties. These include:

These varieties may still show some signs of peach leaf curl, but they are less susceptible to damage than non-resistant varieties. The Frost variety may need an application of fungicide the first two years of growth to fully develop resistance.

Another method of controlling peach leaf curl is by using a dormant oil spray. These sprays contain various forms of copper which are powerful fungicides. The spray is applied when the tree is bare and dormant during winter or just before buds appear. Copper mixed with lime-sulfur, known as Bordeaux mix, is also effective for preventing peach leaf curl.

Raking up old leaves and fallen fruit and disposing of them may help also prevent the spread of peach leaf curl.

However, control measures are only effective for the next season and nothing can be done to stop an infection during the season when symptoms appear.