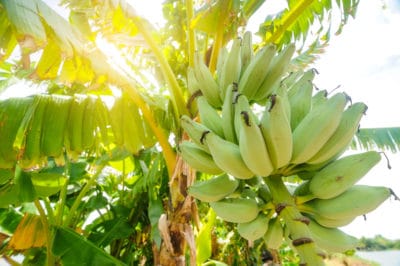 How Long Do Bananas Take to Grow?

Bananas are unusual fruits in a number of ways. They don't grow on actual trees, many don't produce seeds and they have three different kinds of flowers on one stalk. Although the plants take months to flower, the bananas themselves develop within a few days after flowering. However, they then take several months to mature.

The so-called banana tree is actually a perennial herb related to ginger. Commercial grocery store bananas are vegetatively propagated, as they only produce seeds that will never mature. Other banana varieties – some of which are edible – do produce seeds. With the exception of its flowering period, the banana tends to take its time to develop and mature.

Commercial bananas are only grown in the tropics, but other edible bananas can be grown in USDA Zones 7 to 11. Some should be grown in pots and moved indoors during winter. Here are some possibilities:

You can grow new plants from those bananas that do produce seeds. The seed should be soaked in warm water for 24 to 48 hours. Germinating banana seeds need a temperature of 60°F (15°C). However, they germinate better with temperature fluctuations, such as 19 hours of cool temperatures and 5 hours of warm temperatures. Sow in rich, moist soil. They should germinate within two weeks to two months.

Whether you sow seeds or start your bananas from suckers, you’ll need patience. The plants themselves grow quickly, throwing up new leaves and shooting up in height. Within a few weeks, a banana plant may look mature. The “trunk” of the banana stem is called a pseudostem, and will reach maturity during that period of fast growth. At that point, the plant begins to develop its true stem.

The banana flower stalk – inflorescence – grows up the center of the pseudostem, arching down and producing a striking flower. Bananas don’t usually produce flowers until they are about six or seven months old. Banana fruits grow only from the female flowers, although the plant also produces male and neuter flowers. From flowering to fruit takes only a few days.

Although the bananas develop quickly from the flowers, they will take months to fill out and develop flavor. Depending on the variety, the fruits will not be ready to harvest for two to three months. Bananas are ripened off the tree, so growers allow them to reach full size, but harvest them while they are still green or just yellowing in color. They take a week or more to ripen.