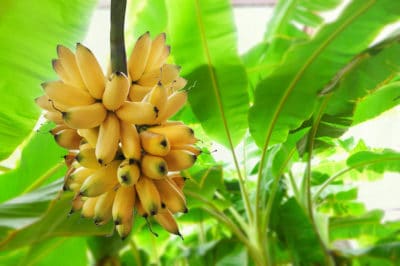 Where Do Bananas Grow?

Say the word “banana” and most people will immediately think of the yellow grocery story fruit. However, this plant is also grown for its ornamental value. In some climates, you can grow bananas outdoors, while in others, they are limited to the greenhouse or a container that moves outside for the summer.

What Countries Grow the Most Bananas?

Edible bananas are typically grown in countries with tropical climates and rich alluvial or volcanic soil. India is the largest worldwide producer of edible bananas, producing more than twice as much as its nearest competitor, China. The Philippines rank third in banana production, followed by Brazil and Ecuador. In the US, only Hawaii and Puerto Rico grow bananas commercially.

What are the USDA Zones for Bananas?

Edible bananas such as the Cavendish you find in the grocery store are tropical plants – they are usually grown in areas like Hawaii and Florida, in USDA Zones 9 to 13. Many ornamentals can be grown in Zones 9 to 11, although they may need frost protection. Although some varieties are advertised as hardy to Zone 4, you’re taking a big chance.

What Are Banana’s Temperature Requirements?

In the wild, you can find banana plants in tropical rainforests or the high altitude of equatorial mountain ranges. Typical temperature requirements are as follows:

Can I Grow Bananas Indoors?

The banana family includes a number of plants that are suitable for growing indoors. These are almost always ornamentals, as the requirements for fruiting cannot usually be met in the indoor environment. Plants for growing indoors include those less than two feet in height and others up to six or eight feet. Many have visually appealing leaves in various colors or patterns. Ask an expert for advice.

Can I Grow Bananas Outdoors?

As long as you can meet their temperature requirements, you can grow ornamental and edible banana plants outdoors in many areas. Gardeners in areas where occasional frost occurs must plan on winter protection to prevent damage from cold. Some grow their banana plants in containers that can be moved inside for cold periods or the entire winter.

Why Are Bananas Grown?

In addition to being a source of food, bananas are also grown for other reasons. In tropical countries, banana leaves are used to wrap food for cooking and storage. Fibers from stems and leaves are used to make paper and rope. Fehi bananas, grown in Polynesia, produce a red dye. In Central America, the sap of red bananas is considered an aphrodisiac.

What Kinds of Bananas Can I Grow?

Your climate is the primary determinate for banana varieties. Plantains – sometimes called cooking bananas – tend to be hardier than the typical edible banana, which is a true tropical fruit. Most ornamental bananas suitable for container growing can be grown almost anywhere. You may need to bring them indoors for the winter in cooler climates.

What Are Some Possible Banana Varieties?

As long as your climate is right, you can choose among these edible varieties:

Where Should I Plant Bananas in the Garden?

In its native habitat, the banana is an understory plant. It grows in ares with bright but indirect light. Full, searing sun can damage and even kill bananas. However, full shade is too dark. An area that gets morning sun is a good choice. You must also make sure the soil in that area drains well, or build a raised bed for your banana plants to promote better drainage.

How Do I Grow Bananas?

Once you’ve met their needs for the right amount of sunlight and highly fertile, well-draining soil, water and fertilizer are the next considerations. The soil in which bananas grow should be evenly moist. If necessary, water every other day. Feed with a dilute liquid organic fertilizer once a week while the plant is actively growing. In colder areas, protect from frost.