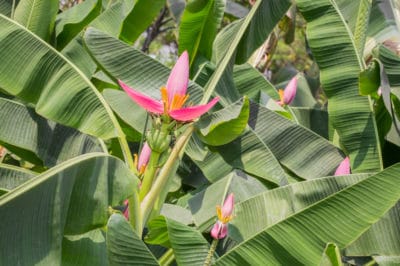 Bananas are a favorite tropical fruit, but aside from that little tidbit of information, there are probably lots of things you don't know about bananas. From habitat to flowering to the structure of the plant itself, banana tree facts cover the unusual to the mundane. Try these for a conversation starter.

A Banana Tree Isn’t a Tree

Although many varieties of banana have the appearance of a small tree, the banana is actually a perennial herbaceous shrub. A couple of close relatives include bird of paradise flowers – a showy ornamental houseplant – and ginger. The so-called tree “trunk” is actually composed of a tight whorl of individual leaves. Some bananas are more like bushy shrubs.

Some Bananas Don’t Grow in the Tropics

There are lots of banana varieties for temperate climates – range for this plant includes USDA Zones 8 through 12. Among this group are:

The banana has a single flower stalk that appears about 10 to 15 months after the plant is first potted or placed in the garden. Called an inflorescence, the stalk contains both male and female flowers, although only the female flowers bear fruit. Once the flowers bloom, it can take more than six months for the banana fruits to appear and mature.

You Can Eat the Flowers

Banana flowers are composed of overlapping fleshy petals, often in red, magenta or purple shades. Shaped like large tears, they are often featured in oriental cuisine such as curries and salads. The large outer leaves or bracts can be used as platters or discarded. The more delicate inner petals are soaked in acidic water and eaten raw or cooked. Petals must be individually cleaned before eating.

The Peels Are Edible

While the peels are edible, they don’t necessarily taste all that good, as many have a bitter flavor. In some cultures, banana peels are used for stuffing in the same way you would stuff a pepper. People also put them in smoothies, cut them and use in stir-fries or make them into dried banana peel chips. There are some questions about whether the peels are actually nutritious, however.