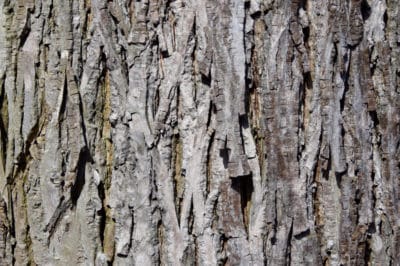 Peeling Away the Secrets of Hickory Tree Bark

Like human skin, hickory tree (Carya spp.) bark changes as it ages. Hickory saplings’ smooth, light-colored bark darkens and furrows over time. On two hickory species, it eventually peels away like sunburned skin and attracts woodland creatures that help protect the trees from a seriously destructive pest. We hone in on hickory tree bark -- and what lies beneath it.

Mature hickory tree bark grows in vertical ridges. The ridges have different depths and spacing, but they’re always vertical. That said, only four of the dozen hickory tree species native to the United States have truly distinctive bark:

Identifying the other native hickories from their bark is difficult. Rely on their leaves or nuts instead.

What Is Hickory Tree Bark Made Of?

Bark is the visible part a hickory tree’s cambium, the thin layer of tissue that produces its sapwood (xylem) and inner bark (phloem). Phloem transports sap photosynthesized in the leaves throughout the tree. When phloem cells wear out, the tree pushes them outward to form bark.

In the cooperative spirit of all good ecosystems, endangered Indiana bats make their summer roosts in the crevices beneath shellbark and shagbark hickories’ bark. Brown creepers — tiny birds with slender, curved bills ideal for probing crevices — build hammock-shaped nests behind it.

In return for the shelter, the little creatures devour thousands of hickory-infesting insects. Among them are hickory bark beetles, the trees’ deadliest pests.