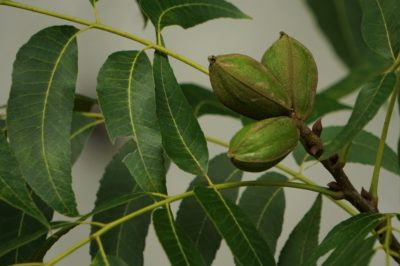 The largest members of the hickory (Carya spp.) family, pecan trees (Carya illinoinensis) grow wild in forest groves from the Atlantic seaboard south to the Gulf Coast and west to the Kansas prairie. They’re also commercially cultivated in the parts of USDA hardiness zones 6 though 9 with long, warm growing seasons. Whether wild or cultivated, they share the same large, distinctive leaf.

A single pecan leaf is actually made up of nine to 17 leaflets. Between eight and 16 of them line up in opposite pairs along a central stem. The last is the terminal leaflet. Each is lustrous, deep green on top and pale green underneath. When young, it’s matted with fine hairs that shed over time.

From the tip of its terminal leaflet to the base of its stem, a pecan leaf measures between 12 and 20 inches long. Each narrow, lance-shaped leaflet measures from 3 to 8 inches long and curves at the end like a falcon’s beak. It has toothed edges; occasionally, the teeth themselves are toothed.

Some people find the odor unpleasant.

A pecan leaf’s job is fourfold:

At night, a pecan leaf inhales oxygen and exhales carbon dioxide just like we do. But the carbon dioxide equals just 10 percent of the oxygen it releases during the day.

The Pecan Leaf as Food

For every person who loves pecan nuts, countless pests are equally fond of pecan leaves. Topping the list are aphids, pinhead-sized insects that latch onto a leaf in bunches to drain its fluids with their needle-sharp mouthparts.

Hickory leaf stem gall phylloxera are aphidlike insects. They irritate a leaf’s tissue enough that it grows galls to envelop them. They remain inside from spring until midsummer, producing several new generations. Eventually the galls blacken, break open and release their captives. Although not disease-related, the galls look alarming.