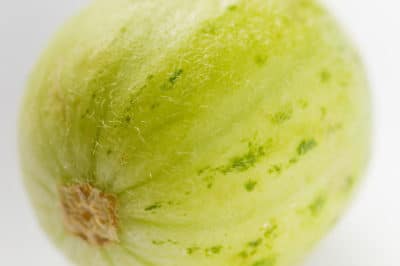 The look of lemons meets the crunch of cucumbers: Lemon cucumbers might be confused about what they are, but their novel appearance and sweet, crispy flesh make a combination many gardeners find difficult to resist. If you’re among them, read on to learn all about growing these unique heirlooms in your cucumber patch.

While there’s a debate about where lemon cukes actually originated, many sources think they came from India. Others suggest that they were introduced in the Middle-East during the 1500s and arrived in the United States and the late 19th or early 20th century.

Spherical, lemon- and white-striped fruit isn’t the only thing separating lemon cucumbers from their more conventional relatives. Other major differences include:

Their differences aside, lemon cucumbers require the same growing conditions as other
cuke varieties:

One month before planting your seeds, loosen the planting bed remove the weeds and debris and work a 2-inch layer of organic compost into the soil. When the vines start flowering, feed each one was 1 to 2 tablespoons of organic, slow-release balanced granular fertilizer.

Lemon cukes need at least six hours of daily sun. Where the temperature regularly exceeds 85°F (29.4°C), however, afternoon shade is a must. Protect them with garden-store shade cloth if necessary.

Lemon cucumbers need 1 inch of water per week, or 2 inches when rainfall is absent. Provide slow, deep watering with a soaker hose or drip system two or three times per week. One inch of water equals 1 gallon per square foot of soil.

Powdery mildew covers lemon cucumber vines with powdery white spores during warm, damp weather. To prevent an attack, spray your cucumbers with 1 tablespoon (14.8 ml) of baking soda and ½ teaspoon (2.47 ml) of liquid soap in 1 gallon (3.78 liters) of water. Apply it twice weekly when the temperature is between 60 and 81° F (20 and 27.2° C).