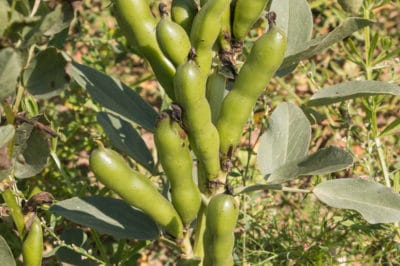 How to Grow Fava Beans

Fava beans are unusual in that they are not a warm-season annual like most beans. Flowers are a striking mix of white and deep purple, often with stripes. They also have a different taste and texture and are used differently in cooking. They are also commonly used as a cover crop. In other respects, they are true beans – they are legumes and fix nitrogen.

When to Plant Fava Beans

Favas should be planted in early spring, about the same time as peas and lettuce. Frost tolerant, they are hardy to about 21°F (-6°C). They can also be planted in late fall to winter over, especially when being used as a cover crop. Soak beans for about an hour prior to planting. Space four to six inches apart and plant two inches deep.

Favas are a different species (Vicia fabus) from other beans such as the Phaseolus or common string bean. Also known as the broad bean, faba bean, field bean, bell bean and tic bean, they have varietal names as well, such as:

Most fava beans are bush beans, although the Ianto variety grows six feet tall. They can tolerate high salinity and clay soils, but do best in sandy loam. Like most beans, they prefer soil that drains well. They won’t grow well in hot, dry weather. Taller varieties should be staked or trellised.

In the US, fava beans are more likely to be grown as animal and poultry feed or used as a green manure. However, in Europe, the Middle East and Far East, they are used in a wide variety of dishes. Immature beans, bean pods and even the leaves can be eaten. The Chinese make fermented bean paste with favas, while fry and then salt and spice the beans.

Favas as a Cover Crop

Many gardeners use favas to improve their soil. The beans produce considerable green material that can be cut down and allowed to decay or tilled into the soil. Like all legumes, they will fix nitrogen, which remains in the soil when they are used as a cover crop or green manure. Some gardeners harvest the bean and then till in the top growth, getting double benefits.

Fava beans are edible and many people can eat them without problems. However, they can cause a dangerous reaction known as favism. Some people have an enzyme deficiency and are unable to metabolize the beans properly. A condition called hemolytic anemia – abnormal breakdown of red blood cells – may occur. It is more likely in people of Mediterranean, Southeast Asian or African descent.