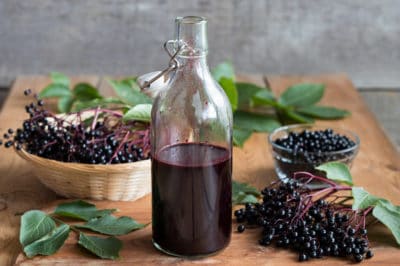 The elderberry plant, known scientifically as sambucus, can be found in many a yard or garden but is also known for growing in the wild; the most common cultivars are the European and the American elderberry. The flowers and the berries of this plant are edible. The elderberry fruit is juicy, tangy, and quite versatile, being used in everything from pancakes to facial creams! To learn more about the elderberry, keep reading!

It is good to know what elderberry trees and fruit look like. There are some plant look-alikes that can be toxic, so it’s important to know how to find the right, edible plant.

Elderberry plants grow white flowers on an umbel, an umbrella-like construct; as a result of this, the elderberry fruit grows in a broad cluster rather than on the narrow stem seen on impostors. Beyond this, the fruit of the elderberry is usually black, dark blue-black, or red.

What Parts to Eat

The elderberry is edible when cooked. Most recipes call for cooked berries. As previously mentioned, elderflowers are edible, too. You should not eat the stems, leaves, seeds, or roots of the elderberry plant. These parts of the plant contain a chemical that creates cyanide when digested and can cause severe illness and symptoms including:

What Isn’t an Elderberry

The chokecherry (also called chokeberry) can appear similar to the elderberry, and is edible although it’s quite sour until cooked. The chokecherry’s bark is usually grey or reddish brown, but turns dark as the tree ages. The fruit is usually dark red or black and the leaves are dark green and serrated.

When in doubt about the nature of a plant it’s advisable consult an extension office, master gardener, or other plant professional for the additional advice.