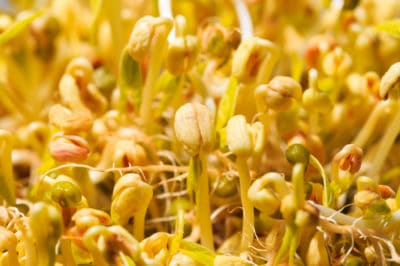 How to Grow Bean Sprouts

Although mung bean sprouts may be the sort most people recognize, you can sprout any kind of bean, as well as other edible plants like alfalfa and radishes. Low in calories, bean sprouts are high in fiber and provide protein, plus vitamins B and C. They are used in many Middle East and Far East cuisines.

Bean sprouts are the immature shoots of legumes. They include the root, the seed and the first set of developing leaves, or cotyledons. Unless grown in soil, they do not develop root hairs. Typically white, pale yellow or cream colored, if exposed to light they will be green at the top. Texture varies from slightly crunchy to very crisp.

Bean sprouts are usually germinated in the dark. This produces the well-known pale color. However, they can also be exposed to grow lights or sunlight and the leaf ends will turn green. Alfalfa sprouts (alfalfa is a legume), for example, are typically green on the tips. Exposure to light increases the nutritive value of the sprouts.

Beans – as well as other vegetable seeds – can be sprouted at home. Once sprouted, they are used in stir fries, soups or egg dishes. Here are some common kinds of beans used for sprouting:

Water, air and warmth are all you need to sprout bean seeds. Pick over the seeds to remove rocks and debris. Rinse well and drain. Place in a commercial tray or homemade version such as a plastic tray with holes punched in the bottom. You can also use a glass jar. Replace the jar lid with a piece of mesh or screening.

It takes about a week to grow sprouts. Keep the jar or tray in a warm, dark cabinet. At least once and preferably twice a day, rinse the seeds/sprouts with cool water and drain thoroughly. Trays can be placed on the level, but a jar should be tipped up slightly so it will drain. Too much moisture can encourage mold.

Many seeds cannot be easily digested unless they are soaked, sprouted and cooked. In some cultures, the seeds or sprouts are also fermented. Some beans, such as kidney beans, can be toxic if eaten raw (that includes their sprouts). Sprouting eliminates or reduces gas-forming compounds found in beans. Sprouting also improves the nutritional profile of the seed in many cases.