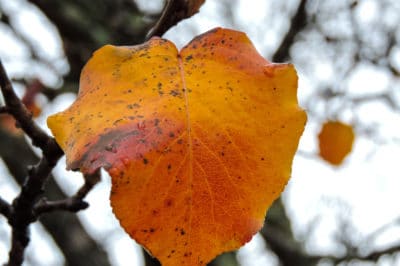 Bradford pears explode in a spectacular display of blooms each spring making them a popular ornamental plant. The trees won't produce fruit like the European pear, but it sure hasn't stopped people from spreading them far and wide. Like European pears, these trees are susceptible to fungal and bacterial infections. Blight and spot are among the chief offenders of the Bradford Pear.

A bacteria called Erwinia amylovora is responsible for the disease known as Fire Blight. The Bradford Pear is fairly resistant to blight, but it still can be a problem.

These are telltale signs that your tree has fire blight. Bacterial diseases are difficult to get rid of. The first step is sanitation. Sanitize all the tools used on that tree or neighboring fruit trees.

Remove all infected limbs and branches in the summertime when the disease is at its most dormant. Fire blight loves warm and moist conditions. Temperatures above 70°F (21°C) with rainfall create ideal conditions for fire blight. Avoid using high nitrogen fertilizers on an infected tree. New growth often stimulates the bacteria too.

Leafspot is a fungal infection that occurs most commonly in the spring when the tree is producing new growth and the weather is cool and moist. For the most part, leaf spot won’t harm the fruit or the tree. In severe cases, it causes damage to foliage and branches.

Trees exhibit small to large spots on the tops and undersides of leaves. Spots range in color from bright raspberry red to a rusty brown. Because it’s mostly a cosmetic issue there’s no reason to panic. Instead, combat it over time.

Remove affected areas of the tree. Improve air circulation and avoid wetting the foliage while watering. Water during the day and allow the ground to dry out before night time.

Structural weakness isn’t a disease, but it is a well-known condition of the Bradford Pear. The strongest branch on a tree grows almost perpendicular or at a 90-degree angle from the trunk. Bradford pears are known for upward growth and branches that grow at narrow angles from the trunk. These branches will split in a wind storm causing a wound that makes the tree vulnerable to infection.

Prune the tree regularly as it grows during the dormant late winter season. Early pruning is essential for shaping and strengthening young trees. Remove branches that come off at angles less than 45 degrees.