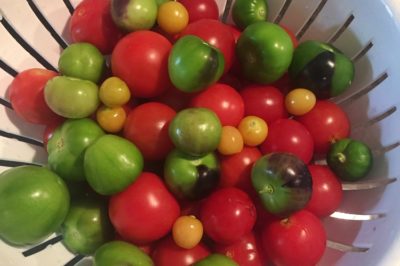 Are Tomatillos and Tomatoes the Same Fruit?

If you are trying a new recipe that calls for tomatillos but you do not have any, you may be tempted to substitute green tomatoes for the tomatillos in the recipe. After all, they do look very similar, from their bright green color to the seedy insides. However, you will soon find out that tomatillos are very different than green tomatoes!

Tomatillos are similar to tomatoes in many ways, from how they are grown to their appearance. If you know how to grow tomatoes, you can just as easily produce tomatillos.

However, tomatillos have a distinctly different taste than tomatoes. This bright green fruit is commonly used in Mexican recipes, from Chili Verde to salsa. The flavor of this fruit is unique; tart and almost citrusy, it lends itself to a variety of dishes.

How Are Tomatillos Different Than Tomatoes

Although tomatillos and tomatoes are similar in appearance, there are many differences between the two fruits.

Tip: There are some varieties of tomatillos that ripen to purple or yellow, but most tomatillos are green at maturity.

Using Tomatillos in a Recipe

Whether you are using fresh tomatillos from the garden or ones you have previously preserved, tomatillos taste like no other fruit or vegetable. Because they look similar to unripe green tomatoes, you might think you can simply substitute green tomatoes for tomatillos in a recipe.

One thing to remember before making any substitutions is that green tomatoes have little to no real flavor. Therefore, not only will the recipe you are using taste different, it may even be bland and flavorless. Since there are many different ways to store tomatillos for future use, there is no reason for you to have to replace them in a recipe.

Things to Know About Tomatillos

Once you know what tomatillos look like, there is no chance that you will mistake a tomato for a tomatillo. Whether you grow them yourself or pick them up at a Farmer’s Market or grocery store, the small green fruits are covered with a papery husk. The smell is lemony, and tart and many people describe the scent as bright and tangy.

The taste of tomatillos is also entirely different than that of tomatoes, and once you have cooked with them, you will know that you can never duplicate the flavor. If you love Mexican food, you should plant several plants, so you always have a supply of this flavorful fruit.