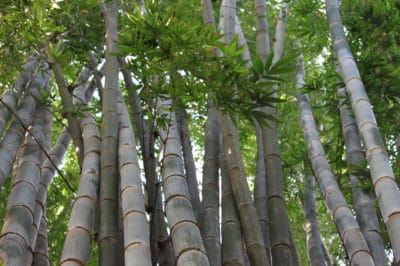 Where Does Bamboo Grow?

Despite its association with Asia and tropical jungles, the giant grass known as bamboo grows in a wide variety of climates. Native bamboos occur in both tropical and semi-tropical areas as well as temperate zones. Some are quite cold hardy. Across the range of more than 1,400 species, there's a bamboo plant for almost any garden location.

Tropical bamboo varieties generally do well in areas with warm to hot summers, cool winters and relatively high humidity. For example, Bambusa balcooa, native to India, grows in the US in USDA Zone 9b and above. Bambusa chungii – Emperor’s Blue Bamboo, is native to tropical southern China and Viet Nam but hardy to 21°F (-6°C) in USDA Zone 8.

Before agriculture became widespread in the southern US, much of the land was covered by the native form of bamboo known as Arundinaria. Commonly known as canebrake thickets, these clumps easily grew eight feet tall. Home to now-endangered animals and birds such as the Florida panther, Bachman’s warbler and several butterfly species, canebrakes could rapidly regrow after fires and hurricanes.

Some bamboos can handle cold temperatures and even snow. Phyllostachys and Fargesia are two bamboo species considered the most cold-tolerant of the bamboo group. Varieties in each group are hardy down to USDA Zone 5 and some can withstand temperatures down to -20°F (-29°C). Fargeisias are clumping types and Phyllostachys are running types.

Countries Where Bamboo is Native

You can find bamboo in many countries throughout the world. Among these are:

Growing Bamboo in the Garden

If you live in USDA Zones 5 and above, you can grow bamboo in your garden. Make sure you choose a species that’s right for your locality. You have the option of clumping or running bamboos. The latter grows very fast and requires regular maintenance, as some varieties are invasive. Bamboo is available in pygmy varieties that grow up to three feet and giants of 60 feet or more.

The best place for bamboo indoors is a sun-room, atrium or greenhouse. All of these offer plenty of light, which is critical to keep the plants healthy. In addition, indoor bamboo need attention to humidity, whether with misting or trays of pebbles full of water. The bamboo containers should drain well and be heavy enough to keep taller bamboos from toppling over.