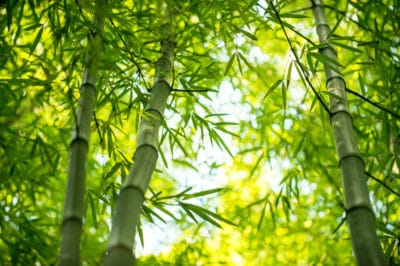 How to Grow Bamboo

Although bamboo is a symbol of the Orient, it is also grown in many other regions. Adaptable and surprisingly hardy, bamboo plants can be grown in containers, used as houseplants or become huge groves of tall plants. Some species are edible. Some bamboo can become invasive if not carefully managed.

Is Bamboo a Tree?

Bamboo is actually a type of giant grass. The plants grow from rhizomes (just like Bermuda grass) and once established can grow very quickly. There are over 1,400 species of bamboo. Some grow only a foot tall, while the giant timber bamboo may grown 40 feet or more. The wood of many species is very strong and is used in construction. Bamboo is also used as food and for paper.

Is Bamboo Annual or Perennial?

Bamboo is actually a perennial grass. Most varieties behave like an evergreen, and leaves remain green year round in temperature climates. A few are deciduous or semi-deciduous. Even so-called evergreen bamboo, however, may shed leaves in very cold winters. Depending on the variety, bamboo may remain evergreen in USDA zone 6, but not in colder regions. Bamboo will grow in any zone down to USDA 5.

Bamboos that have leptomorph rhizomes are very invasive under the right conditions. Known as running bamboos, these have rhizomes that grow in a horizontal direction and can spread very quickly. These bamboos should be planted in containers or kept under control with regular rhizome pruning. Clump bamboos grow much more slowly and are not usually invasive even in the best of growing conditions.

Does Bamboo Have Flowers?

Bamboo does flower, but only near the end of the plant’s lifespan. Some bamboo can live for 120 years, so you may not ever see the blossoms from a particular clump. Since a clump of bamboo generally grows from a single root mass, the entire clump will flower and then die. The flowers produce fruit called bamboo rice by the Chinese and Japanese peoples.

What Varieties of Bamboo Are There?

There are more than 1,000 species of bamboo and many varieties within some of the species. However, some of the most notable are:

What Soil is Best for Bamboo?

Bamboo usually prefers a moderately acidic soil. Loam or sandy loam provide nutrients and proper drainage. You can improve your soil by adding aged manure, organic compost or well-rotted leaf mold. If your soil is primarily clay, add granite, sand or perlite to improve drainage. You can also build up the soil above ground level for better drainage.

How Do I Fertilize Bamboo?

Once you realize bamboo is a grass, it makes sense that it has similar nutrient needs. Extra nitrogen promotes growth for both bamboo and lawns. The two main growth periods are early spring and summer, so at a minimum add a high-nitrogen organic fertilizer at those times. For best growth, fertilize in early spring, late spring and midsummer.

How Do I Water Bamboo?

Bamboo’s water needs vary with age. When first planted or in containers, bamboo needs frequent and copious amounts of water. Full-grown bamboo needs much less water. However, newly planted bamboo are also sensitive to flooding and can become waterlogged and drop leaves. Good soil drainage is critical. A drip irrigation system will help you balance out water amounts.

Can Bamboo be Grown in Containers?

Most bamboos can be grown in containers. Even bamboos that normally grow very large can be dwarfed for container growing. Make sure the container has plenty of drainage holes and layer rocks or broken pottery in the bottom inch of the pot. Soil should be fertile and drain well. Bamboos in containers need careful attention to watering and fertilizer.

How Do I Repot Bamboo?

Bamboo planted in containers can become root-bound. You can divide or repot the plant. Be careful not to damage the roots in spring and summer, when the bamboo is actively growing. To repot, turn out the plant and gently remove soil from around the roots. Either trim and replace in the old pot with new soil, or plant in a new and larger pot. Water in well.

Can Bamboo be Grown Indoors?

A few bamboo varieties may grow indoors, but they are challenging. It’s difficult to provide the humidity they need. At the same time, they are susceptible to root rot and may need to be kept on the dry side during winter. They must also have plenty of light. An atrium or greenhouse usually provides the best conditions for indoor bamboo. Grow in pots, so you can rotate outside periodically for best health.

Where Where Does Bamboo Grow?

Bamboo grows in many different climates and locations, although most bamboo is native to either mostly tropical climates or temperate areas. Native bamboos are found in Chile, Mexico, the Southeastern US, and in many areas of Asia. There are also some bamboos native to Africa and Australia. Only Canada and Europe are not known to have native bamboos. They can be found in mountains as well as lowlands.

How Do I Propagate Bamboo?

Although bamboo can be propagated from seed, the irregular and infrequent flowering pattern makes this difficult. Most growers propagate with cuttings. Cut a culm (stem) that is between one and two years old and has three to five nodes. Each culm will have a piece of rhizome attached. Plant immediately in a pot or new bed and water in well.

How Fast Does Bamboo Grow?

Bamboo growth depends on the species and the age of the plant. Established clumps will grow much more quickly. Running bamboo grows about three to five feet a year, while clumping bamboo grows about one to two feet per year. Both spread outward at the same rate as they grow upward. However, new shoots of some well-established varieties may grow 35 feet within two months.

How Fast Will Bamboo Spread?

Should Bamboo be Thinned?

Thinning a clump or grove of bamboo helps keep the plants healthier. Thinning the plants allows for more sun exposure and improves air circulation, which may also lessen problems with insects. Proper spacing varies according to the size and species of bamboo. Cut away dead, weak or unwanted culms with a horizontal cut close to ground level.

How Do I Control Bamboo?

Choosing a variety for your situation is the first step in controlling bamboo. Clumping bamboos don’t spread as fast as running bamboos. You can also put a permanent barrier around the clump. Spring and fall rhizome pruning with a sharp shovel helps with control. Use a flame gun to burn off small shoots. In rural areas with large clumps, some people periodically burn the entire clump to the ground.

How Can I Kill Bamboo?

Bamboo is very difficult to eradicate once established. Herbicides are the most common method. However, organic gardeners can dig up all the rhizomes – a time-consuming, laborious process that involves sifting the soil. You can also try putting in a barrier, cutting the bamboo down and covering the clump with a tarp. Finally, cut it repeatedly at ground level to starve the rhizomes. Combining all these methods may be most successful.

Some varieties of bamboo have edible shoots that can be eaten after they are cooked. The varieties that must be cooked contain a toxin that can make you sick if the shoots are eaten raw. Other varieties can be eaten without cooking. Make sure you know what kind of bamboo you have before eating it; check with an expert. Bamboo shots may also be canned or dried.

How Can I Use Bamboo?

Bamboo plants are a natural as a screen. They can be used as a wall accent, particularly against a visually unappealing wall. Tall bamboo provide shade. You can mix several different sizes and colors of smaller bamboos in an accent garden. Fine-leafed bamboos can be trimmed into topiary shapes. Some smaller bamboo can also be used for bonsai.