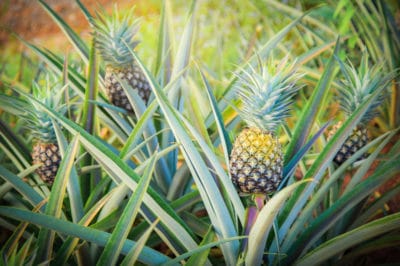 Where Do Pineapples Grow?

Sweet and tart, the flavor of pineapple is unmatched in nature's kingdom. This fruit is an iconic symbol of the tropics worldwide. Known best for its starring role in the cocktail pina colada, the pineapple is versatile in the kitchen. Eaten fresh it is a scrumptious snack. When juiced it can be used as a sweetener. Cooked pineapple even has savory applications like pizza and barbeque.

Pineapples are bromeliads classified in the subfamily of Bromelioideae. Bromeliads are known for being epiphytic plants. Epiphytic means they grow symbiotically off of other plant species. In a jungle, this plant family is found growing up in the canopy off of tree branches. The subfamily of Bromelioideae contains species which are both terrestrial and epiphytic. Pineapples fall into the category. They are the most commercially important bromeliad.

Virtually all bromeliads come from the Tropical Americas. In the wilds of South America, pineapples are ground bushes resembling their tree-bound cousins.

The Pineapple (Ananas comosus) is a five-foot-tall herbaceous plant. The term Ananas comes from an ancient Tupi word which refers to pineapple fruits. Long sword-like leaves spout from a central stalk. These leaves can grow to three or four feet wide. In the middle pockets are formed where the leaves come from the central crown. Like other bromeliads, pineapples receive most of their moisture and nutrients through their leaves and in particular these pockets.

A pineapple plant must be about 16 months old to flower. A central flowering stalk protrudes from the crown. This stalk will bloom with up to 200 individual blossoms. A flowering pineapple plant is a beautiful sight.

Each flower produces a berry. Each segment or bract on the outside of a pineapple represents one flower and one fruit. The berries coalesce to form the larger pineapple. It takes 24 months to grow a pineapple to fruition.

In nature, hummingbirds pollinate pineapples. Pollination isn’t necessary for fruit, only seed. Since pineapples propagate very well vegetatively and we prefer fruit without seed measures are taken to prevent pollination from happening. Some breeding facilities will hand-pollinate pineapples to produce seed and develop new varieties.

Pineapples are considered perennial plants, but this description gets complex. Each pineapple plant only produces one shoot and one fruit. After harvest, new shoots appear from around the central crown. Each of these shoots will grow another fruit, so the plant seems in this way to be perennial. Technically each shoot represents a new plant.

New shoots or ‘slips’ can be left in place to grow. Commercially they are cut off and replanted. Giving these slips their own space allows them to grow larger fruits. Another way to propagate pineapple is from the green tops. The tops root just like a carrot top or a potato when introduced to soil or water.

Spread throughout the tropical Americas in ancient times, the first written record referring to the use of pineapple is from the Aztec and Maya civilizations. They were likely cultivating and selecting them for sweetness and quality. It is suspected that the origin of pineapple cultivation occurred near the Paraguay River drainages.

When Columbus’s sailors arrived in Guadaloup, they discovered this odd-looking fruit and named it for its resemblance to a pine cone. In the 15th and 16th centuries the pineapple was taken back to Europe. It spread to Africa, India, Southeast Asia, and Hawaii.

In 1658 Pieter de la Court cultivated the first pineapple in Europe. A gigantic wood-burning stove heated the conservatory where it grew. This became a fad of the times and all northern gardeners wanted to grow their own pineapples. Because of its prestige and difficulty to grow in the north, it was only available to the affluent.

Stories of pineapples being presented to European dignitaries are prevalent. Louis the VX received a pineapple grown at Versailles. Catherine the great grew her own pineapples. Upon the invention of refrigerated transport, pineapples became available to the world.

These beautiful, exotic, and delicious plants are easy to grow. They make excellent plants to learn from because they are so forgiving.

Pineapples will do well outside year-round in USDA zones 10 and 11. Outside of these zones, it is an excellent container plant. Since most nutrients come through the leaves, pineapples are not picky about the soil they grow in. As a rule of thumb, it needs to be well-draining. Waterlogged plants invite disease and may even stunt or rot.

Pour water and nutrients over the top of the leaves so they fill those central pockets. If a plant contains water in the pockets, it likely doesn’t need anymore. Being jungle plants they like humidity and enjoy a good misting every week or so.

Feed pineapple plants every two weeks with a liquid organic fertilizer. Some useful fertilizer options include:

Dilute any fertilizer to half strength before pouring on your foliage. These plants take years to cultivate. Losing one is devastating to a home gardener.

Globally, humans consume approximately 26 million tons of pineapple annually. About one-third of the world’s pineapples come from Costa Rica, and three-quarters of Costa Rica’s pineapples are sold in Europe. Other main contributors to the global pineapple market include Brazil and the Philipines with India slowly growing an export market.

Unfortunately, most of this production is highly industrialized and dependent upon chemicals and non-renewable fossil fuels. Farm workers are often underpaid and exposed to harmful pesticides. The practices used degrade soils and devastate ecosystems. When organic or small-farm pineapples are available, they are always the more sustainable and ethical option.

Pineapple plants are removed after one or two fruitings and the earth is tilled. All propagation is done through slips which get replanted as genetic clones of the original plant.

Leave fresh, uncut pineapple on the counter for up to three days. After this time it should be cored, peeled, and cubed or cut into rings and refrigerated in a Tupperware or plastic bag.

It will last in the fridge for up to a week. To store pineapple longer than a week it needs to be preserved. Freezing is an easy and convenient way to store fruit for up to a year or more. Other preservation methods for pineapple include canning and drying.