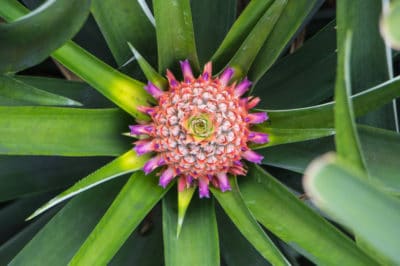 How Do Pineapples Grow?

There's nothing like the tangy sweet taste of pineapple. Delicious savory or sweet, raw or cooked. Europeans named the pineapple in the 14th century upon discovering it in the new world. It refers to the resemblance it has to the pine cone, and the sweet flesh of an apple. Pineapples are not related to pine trees or apples, but the name tells a bit of the fruit's story.

Do pineapples grow on trees?

What do pineapples grow on? The pineapple (Ananas comosus) is a bushy herbaceous plant in the bromeliad family that grows up to five feet tall. These are tropical plants native to Central and South America where they’ve been cultivated for thousands of years.

They have long sword-like leaves and a central flowering stalk. Pineapples are considered perennials even though each plant only produces one fruit. You’ll often hear of gardeners getting fruit from one pineapple plant for years. They do, and in USDA zones 10 and 11 pineapples will produce for a long time. Botanically speaking each new fruiting shoot is a new plant.

Before fruiting, pineapples bloom with up to 200 flowers. This beautiful display is a symphony of color. In their native ecosystem, hummingbirds would be the pollination vectors of pineapples. Commercial farmers take measures to prevent pollination to produce seedless fruit.

Each blossom on a pineapple becomes a fruit classified as a berry. These berries coalesce together to form what appears like one large fruit. Once the main stalk fruits, it will not fruit again. The plant grows new shoots out of the base to the side of the main stalk.

The new shoots are propagative growth. They are genetic clones of the original plant similar to a potato or flower bulb. Commercial growers remove and replant these shoots called ‘slips’ to grow new plants. It’s also possible to propagate pineapples from the green tops. These tops so often cut off and tossed into the compost are potential houseplants.

Do pineapples grow in the ground?

Bromeliads are a special family of tropical plants. Many members of this family are suited for growing high in the canopy off branches of trees. They’re roots grab hold to anchor themselves but nutrient collection is done mostly through the leaves. Like pineapples, many bromeliads have water-holding pockets formed by how the leaves grow away from the stalk.

Pineapples plants get most of their water and nutrients from these pockets. They do need the soil, unlike other family members. It is recommended when planting a pineapple slip or top to gently set it on top of the soil instead of burying it.

Thought to have originated near Brazil and Paraguay, pineapples spread throughout South America in ancient times. The first known cultivation and consumption come from Aztec and Mayan records. The taxonomy name Ananas refers to an original Tupi word ‘nanas’ meaning pineapple. In many languages, pineapples are called ananas.

Columbus named the pineapple piña de Indes. He and other Spanish explorers introduced the fruit to Europe, Hawaii, Guam, The Philippines, and Zimbabwe. In northern Europe where the climate is temperate, pineapples fast became a symbol of success.

Grown in hothouses sometimes with woodburning ovens to keep them warm the exotic fruits were reserved only for those fortunate enough to afford them. Because of the European obsession with the pineapples, it is sometimes called ‘the colonist’s fruit.’

James Dole of the Dole Food Company moved to the island of Hawaii in 1899. The first plantation of pineapples on Oahu was in 1900, and it was a 60-acre parcel. Previous to the development of refrigeration on ships, transporting the fruit to the mainland wasn’t viable.

He was the first to can the pineapple in 1903. The production of pineapples in Hawaii led to a ban on imported hummingbirds due to efforts to prevent pollination. Dole continues to grow pineapples in Hawaii, accounting for about .1 percent of the world’s supply. Behind applesauce and peaches, pineapple is the third most popular canned fruit.

In recent decades India has begun commercial production of pineapples. The fruit is gaining popularity in the country, and it is a profitable export.

The worlds largest pineapple producers include Brazil, Costa Rica, and the Philipines. Flowering is frequently induced early in the season. This technique produces a crop of large fruits plus a bonus crop of smaller fruits later.

An earth mound is dug around each plant to trap moisture. It takes 24 months for a pineapple plant to produce one fruit. The plant will then send up to 25 fruiting side shoots out. Home gardeners will often let these grow where they are. Commercial producers want more plants so they replant them in the ground.

Conventional pineapple farming is often done in monocultures with large amounts of chemical use. Farmers in Costa Rica reported using 44lbs of pesticide per hectare of farmland. This is devastating to native soils and waterways. Farm workers are usually underpaid and exposed to dangerous chemicals. Residents often experience an increase in toxins in their drinking water.

Pineapple flesh ranges from white to bright yellow. Flavors may be sweet, tart, floral, spicy, acidic and even piney depending on the cultivar grown. Cultivars develop through breeding programs or natural adaptation to new climates and ecosystems.

Anyone can start they’re own pineapple plant from the top of a storebought fruit. They’re not picky about the soil type as long as it drains well. Waterlogged pineapple roots are not happy. In cooler climates, plant them in containers for exotic looking houseplants.

Simply cut the top off of a pineapple and remove a few layers of lower leaves. Place this top into some well-draining potting soil and within weeks it will grow roots and establish itself. Even a container-grown pineapple will fruit if given the right environment.

Place the plant in a sunny window and keep the temperature in the room above 60°F (15°C). Pineapple plants appreciate the humidity and moisture of a regular misting. Feed with a liquid organic fertilizer like compost tea or fish emulsion diluted to half strength and poured directly onto the leaves of the plant.

Keep the soil damp at all times, but pineapples can tolerate droughts on occasion. These are perfect plants for beginning gardeners because they are easy, rewarding, and impressive.

Harvest when the fruit is totally ripe. Pineapples harvested green will sweeten but not develop to a fully ripe flavor. You can tell if a pineapple is ripe when it turns from a green to a golden or bronze color.

Store them on the counter top for a couple of weeks. If cut place in a plastic bag in the fridge for up to seven days. There are multiple methods of preserving pineapple. The most popular is canning in which pineapples are combined with a light sugar syrup and sealed in jars. Canned pineapples can last for several years. Pineapples can be frozen and dried as well. Dried pineapple is a sweet candy sometimes rolled in sugar and found in trail mixes.