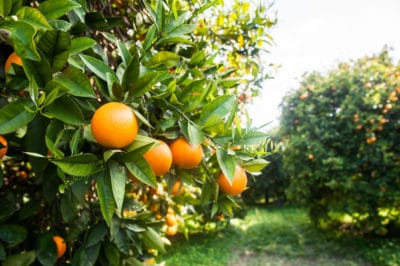 Where Do Oranges Grow Best?

Although orange trees (Citrus sinensis) aren’t known to exist in the wild, some botanists believe they were cultivated in China Asia long before reaching the Mediterranean in the 15th century. Spaniards carried oranges to South America about a century later. By the early 1900s, annual worldwide orange production was approaching 55 million tons (50 metric tonnes). Continue reading to learn where oranges grow best.

As subtropical trees, oranges find an environment to their liking in many parts of USDA plant hardiness zones 9 through 11. Grafted to cold-hardy rootstock and given winter protection, some even bear fruit in USDA zone 8. Just what do they like?

Orange trees need from eight to 12 hours of daily sun. Mature, fruit-bearing trees also need at least 60 inches of water per year – with about 90 percent of it coming during the growing season. Because sunny days seldom produce rain, spring-through-fall irrigation is a regular part of orange tree care.

In the heat of summer, a mature orange tree with a 20-foot wide canopy may need the equivalent of 60 gallons (227 liters) of water per day, delivered via slow, deep irrigation every week to 10 days. Between November and February, when rain is more likely, the same tree requires just 7 ½ to 11 gallons (28 to 41.5 liters) per day.

Orange trees accept both sandy and loam soils, as long as they:

Orange trees in alkaline soils decline slowly from mineral deficiencies. Those growing where the water table is less than 30 inches beneath their lowest roots are smaller than normal, with decreased flowers and fruit.