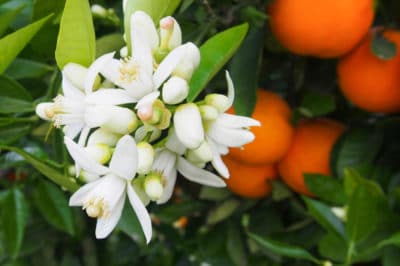 Ways to Use Orange Tree Flowers

When springtime comes to the citrus orchards of USDA plant hardiness zones 9 through 11, it carries the heady scent of flowering orange trees. From central Florida to coastal California, the unmistakable fragrance of billions of dainty, bridal-white blooms saturates the air. Surprisingly, both sweet and bitter orange tree flowers boast perfume – and both are edible. For the many uses of these delightful blooms, read on!

The Chinese began growing sweet orange trees (Citrus sinensis) more than a thousand years ago. Since then, appreciation of their flowers has across many cultures:

Sour orange tree flowers make one of the world’s costliest and intensely scented essential oils. Almost 630 pounds (187 liters) of them go into a single cup (236 ml) of Neroli oil.

Neroli oil takes its name from Princess Anne Marie Orsini of Nerola, Italy. It had been regarded as medicine until she began washing with and wearing it in the 17th century.

Although orange tree flowers are edible, their flavor doesn’t compare to their scent. But infused orange flower water is magical when used in a host of North African dishes, from Chicken Bastilla to Moroccan rice pudding.

To make the water, mash fresh, well-rinsed sour orange flower petals with a ceramic mortar and pestle. After several hours, place them in a glass jar and barely cover them with distilled water. Close the jar and place it in direct sun for at least two weeks.

When its scent is strong enough, strain the water into smaller sterilized jars. It keeps indefinitely in the refrigerator.