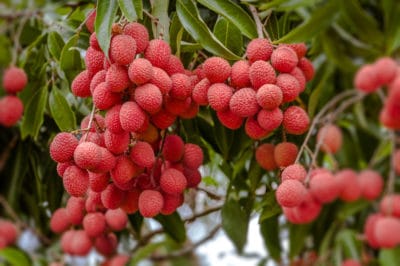 Where Do Lychees Grow?

Lychee (Litchi chinensis) trees are subtropical fruit trees that make handsome as well as delicious additions to consistently warm landscapes. The tree is originally native to southern portions of China, and in Chinese, the word “Lee Chee” means “gifts for a joyful life.” The strawberry-like fruits are high in vitamin C and have an aroma resembling a rose, and some say taste like a cross between a pear and grape.

Lychee trees are native to the lower elevations of Kwangtung and Fukien provinces of southern China, where it thrives along the rivers and coastal areas. The earliest known record of lychees is from 1059 A.D. in Chinese literature, so the fruit tree has a long history. Over the years, its cultivation spread throughout Southeast Asia and the surrounding islands.

In the 17th Century, the lychee made it to Burma and by the 18th Century, it continued its travels making it to India and the West Indies. By the 1800s, the fruit tree arrived in England, France and the East Indies, and in the late 1800s, it arrived in Hawaii, Florida and California, where it’s still cultivated today.

Growing Lychee in the U.S.

In the United States, lychee trees grow well in USDA zones 10a through 11b. However, those living in the warmest regions of zone 9b can grow a lychee tree provided the tree gets protection during an unexpected freeze. Those in a bit cooler climates can grow it in large containers and bring indoors to a protected location during winter.

Expert Tip: Protect an outdoor lychee tree during an unexpected freeze by covering it with sheets or burlap. Water the root system thoroughly the day before cold weather arrives, as it helps insulate the root system.

In tropical climates, lychee trees do not fruit well when grown at sea level locales. It’s best adapted to growing in warm to cool subtropical locations with the following conditions:

Symptoms of cold damage include:

Expert Tips:  Wait until new growth appears in springtime before pruning areas thought to be injured by cold weather. Many times areas that might look dead spring back to life.

Grow a lychee tree in a wind-protected site located in full sun for the majority of the day. It tolerates a wide range of soils provided they drain well. However, if the selected area has a tendency to flood occasionally, plant the lychee tree on a 4-foot high mound to lift the roots out of the soggy conditions. Irrigate the tree weekly.

Consider when selecting a site that an unpruned lychee tree can grow quite large, averaging 30 feet tall and wide. Therefore, plant away from structures or power lines. To help conserve soil moisture and cut down on unwanted vegetation, apply a 4-inch layer of mulch around the planting site, keeping it pulled back several inches from the trunk.