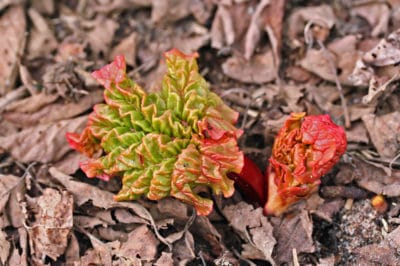 Rhubarb: Here’s When To Plant

When planting rhubarb, a little care goes a long way. Read on for when to plant rhubarb, and what to do to have all the rhubarb you could ever want. For proper growth and production, timing is everything.

When and Where to Plant Rhubarb

Rhubarb thrives in the cooler climates of northern states, from Washington to Maine and south to Illinois; it does well in Canada, too.

For example, commercially grown rhubarb most often comes from:

Rhubarb crowns should be planted in early spring, before the plant begins to grow; there should be no leafing activity at planting. The roots of the plant need to be put into the earth while they’re still dormant.

To grow rhubarb from a cutting off of your existing plant, remove a slice from the crown in early spring, while the plant is still dormant and there are no signs of growth.

Dig up as much root as possible with the cutting, and divide the entire clump of the plant into segments of two starts each. These can be planted immediately.

Rhubarb can be grown from seed, as well. If this is what you decide to do, you’ll start your plants indoors, in pots. When you do this will depend on what you want to get out of your plants. If you’re wanting to plant just for one season, you can start seeds in March and transplant in April.

Should you be planting rhubarb to have it return annually, start your seeds in the fall, just as the weather is cooling down. You’ll transplant them in early April of the following year; seedlings should be at least three to four inches tall when planted outdoors.

To grow rhubarb plants that will produce year after year, forgo your first harvest to let the plant grow and mature enough to weather the winter and come back in the spring. Rhubarb can live and produce for eight to 15 years or more, so the loss of a year’s harvest is worthwhile.

If you plan to buy starts and plant them every year, go ahead and harvest the first year out. When? When stalks are seven to 15 inches long, they can be taken. Don’t rely on color to determine ripeness; different varieties of rhubarb can be pink, red, or green at full maturity.

Because rhubarb prefers cooler weather, planting it at the right time is vital to its health and productivity. Unfortunately, for this same reason, rhubarb does not do well in southern states or the southwest. For those who live in cooler planting zones, though, rhubarb is a great plant for tasty, nutritious dishes and treats.