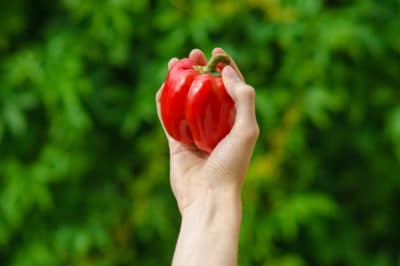 When To Pick Peppers

There is and there isn't a perfect ripeness for a pepper. The truth is many peppers that are believed to be different varieties are actually different stages of the same pepper. While ripeness may not be a key issue, the time of day peppers are picked can make a difference when it comes to storage and shelf-life.

Peppers start out green and as they age they will slowly turn yellow, orange, or red. Green bell peppers, for instance, are just young bell peppers. Red bell peppers are just green bells that have sat on the plant longer and been allowed to fully ripen. Yellow and orange bells are the stages in between green and red. Pick bell peppers at the stage that you most enjoy.

Hot peppers are the same way and when you pick them largely depends on the cultures’ expectation. Jalapenos have different names depending on if they are picked green or red. The capsicum, or heat in a chili pepper, increases as the pepper ages so peppers that are red tend to be hotter than green peppers. Some peppers that change color include:

There aren’t any unbreakable rules when it comes to how to pick peppers. Most varieties of pepper will take between 60-90 days to reach maturity but are still delicious when green. As the fruit matures and turns color sugars and other minerals will concentrate in the fruit and the flavor will develop, but it is really up to you. Pick them when you want to eat them, or pick them and let them ripen on the counter.

To pick a pepper, you’ll want to take the fruit along with a bit of stem attached. Sometimes the stems are easy to break off with a little bend and twist, but it’s far safer to clip them using pruning shears.

When harvesting hot peppers, consider wearing gloves to protect yourself from capsicum burn. You may not feel the heat on your hand but after rubbing your eye, it’ll be noticeable.

To save seed from a pepper, you’ll want a fully mature fruit. The changing of color signals the breakdown of chloroform in the plant cells and also tells you that the seeds are maturing. A green pepper is far less likely to contain viable seed than a red pepper.

Picking from a pepper plant encourages the plant to produce more fruit. You can either leave a few fruits on the vine to reach maturity and use those for saving seed, or you can pick your fruits and let them mature on the counter.