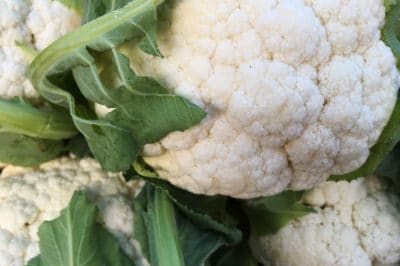 When to Pick Cauliflower

Cauliflower heads are jewels of the garden. After months of being attentive, mulching, watering, shading, battling pests, and preventing bolt; pulling a full head of cauliflower from the garden is a triumph. Don't wait too long or your heads will go from gorgeous to alien looking as they reach toward the sky to bloom.

Cool season vegetables like cauliflower and its relatives in the Brassicaceae family grow during the spring and fall months of the year. This means that your harvest periods will be in early summer, and then again in late fall or early winter. Cauliflower can take a frost, but it will not withstand too hot a day.

Spring plantings will be harvested in early summer. Depending on the variety, cauliflower may take between 50-100 days to mature. If you live in a warmer climate with shorter cool seasons, consider planting an earlier maturing cauliflower. Some Early maturing varieties include:

Fall plantings will mature in late fall or early winter. If you plant in late August, you may be harvesting around October or November. Because the weather is cooling down, early maturing varieties aren’t as desirable for fall plantings.

Instead, you want to select varieties with cold and bolt resistance. Inspect seed packets for information on which season each variety is suited for. Some favorites for fall plantings include:

Despite the expected days to maturity, nature will vary. It’s important to be able to inspect your cauliflower heads and decide when they are ripe for the picking. Cauliflower is actually a giant flower bud or cluster of flower buds. The trick is to let it reach its maximum size and crispness but not to let it flower, or even think about flowering.

Typically a fully mature cauliflower head measures about 6-8 inches in diameter. This will vary with variety so read the seed packet for specifics. Inspect the florets each day for separation or a sign of opening. They should be compact and tightly closed. If they begin to separate, quickly cut that head. Separation is a sign that they are overly mature and going to flower.