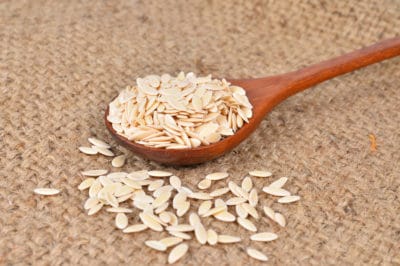 How to Save Cucumber Seeds – Step by Step

While cucumber seeds aren't the easiest ones to save, even a novice gardener can save seeds to grow their favorite cukes year after year with a bit of patience and TLC.

Choosing Which Seeds to Save

Cucumbers varieties labeled “Hybrid” or “F1” aren’t guaranteed to produce seeds that pass on all their traits. Unmarked varieties, or ones labeled “Heirloom” or “Open-pollinated,” are more likely to duplicate themselves, but only if you supervise their pollination. If insects pollinate them, the resulting fruit will contain hybridized seeds.

To guarantee that the seeds you save produce the cukes you want:

Leave the fruit on the plant long enough to mature completely. Its skin will thicken, harden and change from green to yellowish or nearly white. Cut it off with a sharp knife or pruners, being careful not to twist the vine.

Cut your cuke in half lengthwise over a bowl and then scoop out the seeds. Discard the flesh, which has become bitter. Add a small amount of warm water, cover the bowl and let the seeds sit for three days. During the fermentation process, good seeds sink and bad ones start to float as their protective coating dissolves.

Cleaning and Drying the Seeds

After most of the seeds have sunk to the bottom of the bowl, add fresh water so that all the bad seeds and debris rise to the top. Skim them off and rinse the remaining ones in a strainer three or four times. Spread them on a screen to dry in a warm, airy location. Avoid drying on paper towels that may stick to the seeds.

Place the thoroughly dried seeds in a sealable plastic bag labeled with their name, the date and anything else about them you want to remember. Store the bag in the back of the refrigerator so fluctuating temperatures won’t affect the seeds.