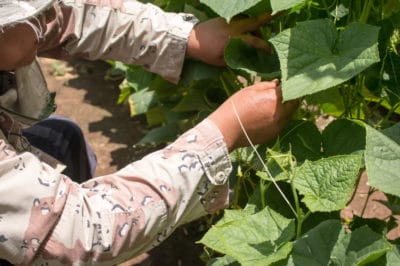 Pruning Cucumbers: How Much Is Enough?

Your cucumber vines are leafing out and their growth rate accelerated each day. You worry that if you don’t do something, they’ll topple their trellises and consume the veggie patch. It’s time to start pruning the vines so they'll stay where they belong and produce bigger, healthier cukes. To learn why and how to prune, keep reading.

Every climbing cuke vine sprouts many lateral shoots from a central stem, or leader. If all of these shoots are allowed to grow, the vines will have more fruit than they can feed and stop blooming. Pruning keeps them from over-producing, so the flowers and fruit keep coming. It also removes foliage that could block the sun and hide disease-transmitting pests.

To avoid harming your vines, use a sharp pair of pruners or simply pinch what you’re pruning off at the leader with your thumb and forefinger. The goal is to create a single, high-yielding stem.

At the point where each cuke leaf attaches to the leader, you’ll find a node with:

The nodes are where all the pruning takes place.

For cukes with fruit measuring 7 or more inches, prune the lowest four to six growth points when they’re 1 to 2 inches long and all the tendrils. Prune the first few flowers as well. Doing this prevents crops from developing before the plants can support them. After the vines have seven true leaves, prune all but one flower or fruit from each node.

Cukes that produce fruit measuring less than 7 inches can support several flowers and fruits at each node without a problem. As long as they’re growing vigorously, it’s fine to let them bloom and bear fruit from the first node upward. In their case, only the tendrils need pruning.