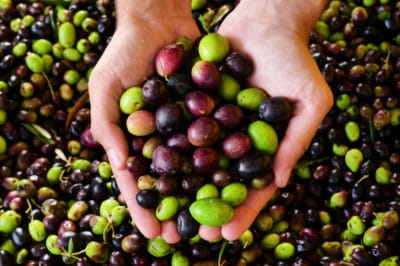 Olives are among the oldest crops cultivated by human beings. This hardy, evergreen tree has been providing us with food, fuel, wood, and medicine for thousands of years. Native to the warmer parts of Europe and the Near East, this tree is now grown around the world in planting zones 8 to 11. Read on to discover interesting facts about olive trees and their fruit.

The oldest known living olive tree is the Olive Tree of Vouves in Crete. This tree is estimated to be between 2,000 and 3,000 years old – and it still produces tasty olives!

Harvested for Thousands of Years

Olives are native to the Mediterranean, and archeological evidence tells us they have been actively cultivated for as long as 6,000 years. This makes the olive tree one of the oldest crops grown by people.

There is no such thing as a green or black olive variety. All olives start out green end up black or purple.

Olives Can be Grown Indoors

Olive trees love the sunshine, but smaller varieties also do well as a potted plant or even a bonsai.

The Wood of Olive Trees is Useful

Olive wood is extremely hard and is used for carvings and cutting boards. Olive wood burns hotter than many other wood, and it produces little smoke.

The Olive is a Symbol of Peace

Since Biblical days, the olive branch has been a symbol of peace. For this reason, an olive branch is displayed on many flags, including the United Nations flag and national flags of Cyprus and Eritrea.

While olives only do well in areas with hot, dry summers and mild winters, where they do grow, they are grown in abundance. There are over 800 million olive trees planted around the world, producing 2.8 million tons of olive oil each year.

The Mission Olive is from California

The popular Mission olive variety was developed by Spanish missionaries in California in the 1700’s.

Ancient people in Rome and Greece did not have fossil fuels for lighting their homes. Instead, they used olive oil, burning it in lamps. They also used the oil in cooking, and cured olives were an important part of their diet.

Olives are Good for You

Not everyone likes eating olives, but if you do, they provide plenty of nutrients, being high in:

Fresh olives are inedible due to the bitter chemical oleuropein, but this compound has medicinal value and is helpful for reducing high blood pressure and treating diabetes and heart disease.