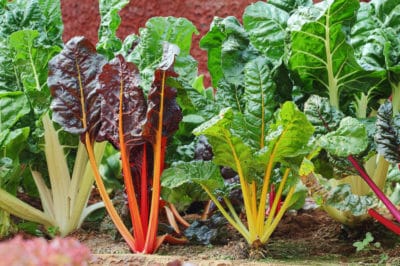 How to Grow Swiss Chard

Swiss chard doesn't have anything to do with Switzerland, but this easy vegetable should be in more gardens. It can be grown from spring into early winter. The leaves and ribs provide different eating options.

Chard is a beet relative and is also known as silverbeet, as well as perpetual spinach. A Mediterranean native, it has deep green leaves with a succulent midrib. Some varieties have red, yellow or white ribs and veins. Although technically a cool season plant, it will also grow well in summer in many climates. It’s easy to learn how to plant chard.

A biennial grown as an annual, chard can be plantedin early spring, several weeks before the last frost date. However, if planted so early that it is subjected to freezing temperatures, it may bolt and go to seed prematurely. It likes fertile, well-drained soil and consistent watering. It is propagated by seed, which is good for about four years under average storage conditions.

One of the clues to chard’s beet family heritage is its seeds, which are actually seed clusters rather than a single seed. Plant seeds ½ to one inch deep, three to six inches apart. Each cluster will produce several plants, which must be thinned with a pair of fine pointed scissors. Chard should be thinned to 12-inch spacings, as the plants will grow quite large over the season.

Most varieties of chard are similar in taste, but there are many color variations. Any of these are good choices:

Like other greens, chard lends itself to repeated harvesting. You can begin cutting individual leaves when the plant is six to eight inches tall. Use a sharp knife or pair of scissors to remove outside leaves. Don’t cut from the central growing point, as it can damage the plant. You can also harvest the whole plant by cutting off at ground level or pulling it up.

Chard has few pests in the home garden. In rainy or humid weather it may develop mildew. Space plants or thin them more widely to promote air circulation. Aphids and leaf miners may chew some leaves but rarely cause serious damage. Some birds also like to peck at the leaves. Don’t interplant with herbs except for mints.