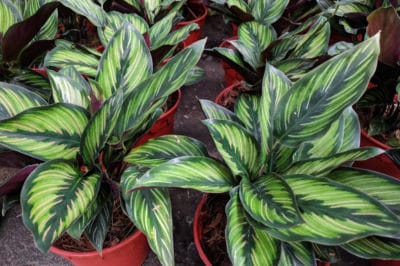 Caring for Calathea Indoors and Outdoors

When you think of Calathea, you probably think of it as a finicky houseplant that’s difficult to grow. Usually, Calathea is grown as a houseplant, but, depending on which variety you choose, Calathea can be grown as a landscaping plant in USDA Hardiness Zones 8 through 11. You simply need to provide the proper care, just as when growing Calatha indoors.

Where Should I Plant Calathea Outdoors?

Plant Calathea in an area of light shade or bright, indirect, or filtered sunlight.

The soil in the area should be porous, loamy soil. It should remain moist but not retain so much water that it becomes muddy or retains standing water.

Look for areas or micro climates where humidity remains high and temperatures remain relatively stable between 60°F and 70°F (16°C – 21°C). Avoid areas where temperatures could drop below 50°F (10°C).

Your Calathea should not be exposed to draughts or winds that bring sudden drops in temperature.

Can Calathea Be Grown From Seed?

While some varieties of Calathea can be grown from seed, the seeds of most varieties are infertile. In any case, Calathea rarely produces flowers and seeds, even when grown outdoors, unless it is grown in a tropical zone where conditions duplicate the areas of tropical forests of Africa and Central and South America where the plant originated.

How Do I Plant Calathea Outdoors?

Calathea is most frequently propagated by dividing mature plants into two or more sections and replanting or repotting each section.

Mature plants can spread to a diameter of 1 foot, so allow 18 inches to 24 inches between each section of the divided plants.

The newly divided plants will start out with sparser foliage than a mature plant, however new leaves will quickly fill in.

Maintain moisture, temperature, and humidity for the new divisions by starting them under a grow tunnel or in a cold frame.

Both grow tunnels and cold frames are removable structures that duplicate the effects of a greenhouse on a smaller, less expensive scale. You can construct them easily on your own.

When the new foliage begins to appear remove the grow tunnel or cold frame. At this point, you can begin treating the new divisions as mature plants.

How Do I Construct a Grow Tunnel?

To construct your own grow tunnel, bend copper or PVC pipe to form an arch. Line the arches up in a row to form a tunnel, and insert the ends of each arch into the ground. Use 3-mil greenhouse grade plastic to cover the arches, and use bricks, sandbags, pavers, or whatever else you might have to weigh down the edges of the plastic.

These milk cartons will not only warm the air and stabilize the temperature in the grow tunnel by absorbing heat from the sun during the day and releasing the warmth at night but also will increase humidity levels as the water evaporates.

How Do I Construct a Cold Frame?

You can use lumber or bales of hay to create the walls for your cold frame. You can then lay old windows or old glass shower doors across the top of the hay or lumber. As with a low grow tunnel, you can use 1-gallon milk jugs to increase and stabilize both the humidity and air temperature within the cold frame.

How Do I Care for Calathea Outdoors?

During the growing season, water your Calathea often enough to keep the soil moist. Water more frequently during hot weather, but don’t allow the soil to become muddy or soggy.

Adding an inch or two of mulch helps retain soil moisture and keeps soil temperatures cool. If you don’t have a problem with slugs, you can add a deeper layer of mulch.

Three to four times during the growing season, apply a balanced organic fertilizer. Water your Calathea thoroughly after fertilizing.

When the growing season is over, stop fertilizing your Calathea and cut back on watering.

How Do I Plant Calathea in Containers?

Calathea spreads out to 1 foot in diameter with lush, thick foliage, so look for pots that allow room for this growth if you are growing your plants in individual pots. Self-watering containers are a good choice.

If you want to grow Calathea in a planter, choose one that allows you to space the divided plants 18 inches to 24 inches apart. Choose containers that provide good drainage, and use a loose potting soil that will retain moisture without becoming soggy.

How Do I Care for Calathea Indoors?

Calathea thrive on consistency – consistent temperature, consistent humidity, consistent lighting, and consistent moisture. These plants don’t do well when exposed to draughts or the sudden changes in temperature that are created when, for example, your heating or cooling system goes on and off.

What Are Some of the Problems That Occur When Growing Calathea?

Problems develop when temperature, humidity, light, or moisture are inconsistent.

How Do I Protect Calathea From Pests and Diseases?

To discourage fungal and bacterial diseases such as Botrytis, also known as gray mold, avoid watering your outdoor Calathea in the evening and avoid watering the leaves. Use a soaker hose to add the water at soil level.

Whether you are growing your Calathea indoors or outdoors, prevent diseases from starting or spreading by trimming off leaves that appear damaged, diseased, or straggly.