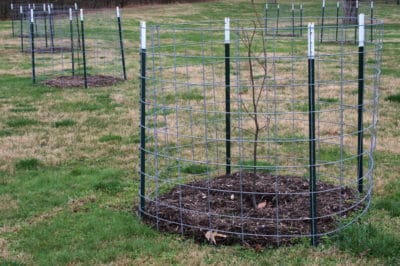 On Their Way Back: America Chestnut Seedlings

At their peak, more than 3 billion American chestnut trees towered over 200 million acres of hardwood forests in USDA plant hardiness zones 5 through 8. They flourished from Maine to the Florida Panhandle and from southeastern Massachusetts to south central Mississippi. Their straight-grained, decay-resistant wood supplied America’s settlers with:

Wildlife feasted on their sweet, oil-rich nuts, as did the settlers and their livestock. Countless tons of the nuts were roasted at the year-end holidays. The wild trees — which often stood more than 100 feet tall and 12 or more feet around — survived up to 300 years.

In the late 19th century, Chinese chestnuts carrying chestnut bark blight (Cryphonectria parasitica) were imported to New York. By 1950, the airborne fungus had nearly wiped out the trees east of the Mississippi River. Only their root systems survive, sending up sprouts that seldom live more than 10 years.

An attempt to reestablish American chestnut seedlings has been ongoing since the 1980s. In 2015, the American Chestnut Foundation planted several hundred seedlings that resulted from backcrossing American and Chinese chestnuts.

The hybrids have the blight resistance of their Chinese ancestors. Everything else – about 15/16ths of their DNA – is from their American one. They’re growing on U.S. Forest Service lands in North Carolina, Tennessee and Virginia.

Expert gardener’s tip: Backcrossing meant breeding the first generation American/Chinese chestnut cross back to its American parent and repeating through six generations until only one Chinese trait – blight resistance – remained.

Sixth-generation backcrossed American chestnut seedlings will be evaluated in the wild for several more years. It may take decades to prove their blight resistance. Currently, the best blight-resistant seedling available to home gardeners is ‘Dunstan,’ a 2nd-generation backcross.

Although hardy in USDA zone 5 through 9, ‘Dunstan’ chestnuts need at least 250 hours of winter temps between 33° and 45 F° (0.55° to 7.2 °C) to produce nuts. To ensure pollination, plant the seedlings in pairs or groups. Grow them in full sun and well draining, sandy loam soil with an acidic or neutral pH.