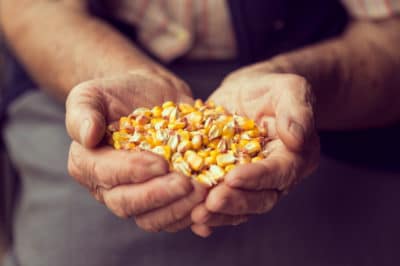 Where Do Corn Seeds Come From?

The History of Corn

Unless you are an agriculture trivia buff, you probably do not know that corn was initially considered a grass, much like the wild native grasses in parts of America that develop a seed head at maturity. While it is true that Native Americans grew corn as one of their main foods, indigenous people from South America and Mexico long before it was introduced to the Americas.

It is also worth noting that over time and through many seasons of cross-pollination, corn began to more closely resemble the corn you might grow in your garden. However, even then, the corn people grew and ate was field corn, not the sweet corn you are likely more familiar with.

How Modern Corn is Different

If you grow corn of any kind in your garden, you know that it is nothing like grass. However, you might be surprised to know that in some forms, corn is considered a grain! This category applies to field corn that has been dried and ground into maize or cornmeal, not fresh corn that you pick and eat or preserve for later use.

Unless you specifically grow corn to dry out and process into cornflour or some other dried form, you can still consider it a vegetable.

If you have had any experience with growing (or eating!) corn, you have probably heard the word kernel far more than you have heard the word seed. However, you can use the words interchangeably, and in conversation, both of them mean the same thing.

However, from both a historical and a scientific view, corn kernels are not actually seeds. Instead, they are a fruit! Some of the words used to describe corn include the following:

To be factually accurate, you would have to describe corn as a grain whose seeds are called fruits, but when you cook it, you name it a vegetable. No wonder people refer to it to as simply a vegetable and leave it at that!

How Corn Has Changed

As mentioned earlier, the corn you raise and eat today is not the same corn as was grown originally. Some varieties of corn changed over time through cross-pollination. Corn is pollinated by wind, and proximity to other corn plants is how cross-pollination occurs.

Science has also introduced new corn seeds in the form of super-sweet and early-ripening varieties of corn. Nearly all types of sweet corn are hybrids, meaning they have been genetically altered to produce sweet corn. While many people balk at the idea of eating hybrid vegetables, they are unwilling to sacrifice that super sweet corn on the cob!

If you want to stick to heirloom or non-hybridized corn, you may have a hard time finding corn that is as sweet as you like. However, since you cannot save sweet corn seeds for planting your corn crop the following year, you may have to sacrifice the sweetness in exchange for generations of longevity.

The Bottom Line of Corn Seeds

If you are a gardener looking for sweet corn that you can eat fresh as well as store for use in the off-season, you probably do not care whether your seed is a kernel or a fruit or a grain. The taste is what you crave, not the scientific meaning.

However you label it, corn of all varieties comprises a large part of your diet-whether fresh, frozen, canned or popped, or even as cornmeal or corn syrup. Regardless of the name by which it is called, corn seeds produce food for humans and animals, and that is not likely to change!