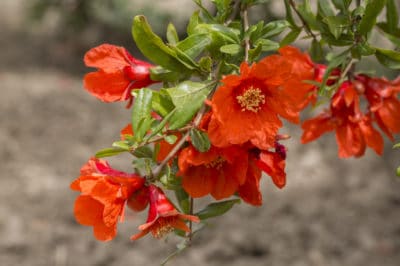 Pomegranates came to us from the area once known as Persia – now known as Iran. The hard-shelled fruits follow showy, red, orange-red or pink flowers that appear in bursts of bloom and may even be found on the tree at the same time as the fruit. Enjoy your trees for both flowers and fruit with proper care.

Once considered an exotic fruit, pomegranates are now readily available in late summer and fall. The bulk of the commercial production comes from India, although California and Arizona also produce pomegranates. Native to arid, warm areas, the tree will grow up to about 30 feet tall and does best in USDA Zones 8 to 10. It is deciduous in most areas.

Even in colder areas, you may be able to grow pomegranates for the fragrant blossoms. Here are some possibilities:

Depending on the variety, flowers may appear on the pomegranate tree at different times, but the flowering season is generally late summer to fall. Most varieties flower in August and September. A few will have bursts of flowers throughout the summer and into the fall. Occasionally, one will display both fruits and flowers at the same time.

Many pomegranates will begin to display scattered flowers at a young age, although they may not fruit for several years afterward. At maturity – usually around four or five years – the tree will flower more heavily. The male and unfertilized female flowers drop off naturally; this is not a problem. Insect infestation, unexpected cold weather and severe lack of water may also cause blossom drop.

Pomegranates are not difficult to grow. They will accept almost any soil but heavy clay as long as it drains well. Drought-tolerant, they need water about once a week. Go easy on the fertilizer – pomegranates are native to areas with poor soils. An organic mulch around the trees may be all it needs to grow and produce well. Prune to shape and remove dead or broken branches.