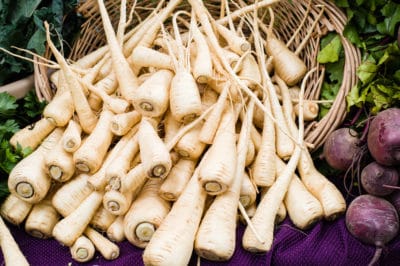 Non-gardeners might not even recognize a parsnip. Gardeners know that these hearty root vegetables become sweet when touched by frost. Parsnips provide food in the winter months when nothing grows and can for last months if properly stored.

Parsnips that are properly grown will store better. Always use fresh seed. The soil should be deep and loose, with a pH of 6.0 to 7.0; add lime if necessary. Although plenty of humus is important, manure can be too high in nitrogen, which causes roots to split or fork. Use well-rotted organic compost and leaf mold instead. Water to keep soil moist but not soggy.

Parsnips are available in several varieties; they may be hybrids or open-pollinated. Most are white and about 10-12 inches long, although a few are more broad and bulbous. Maturity dates vary but are all over 105 days.

As with growing conditions, proper harvesting promotes better storage. Parsnips taste best if allowed to remain in the garden through two or three hard frosts – this makes them sweeter. Very large parsnips may be tough and woody. Dig roots carefully to avoid damaging the root. Brush off soil, but don’t wash as it may increase the risk of rot.

The refrigerator is a good choice for short-term storage of a few parsnips. Don’t wash the roots, but do cut off the leafy tops about one inch from the roots. Wrap in a damp paper towel, place in a plastic bag and store in the crisper drawer of the refrigerator. The parsnips should be good for a couple of weeks.

To ferment parsnips, cut in julienne strips or ¼ inch slices. It is not necessary to peel them. You may add condiments such as red pepper flakes or ginger and other root vegetables such as carrots. Pack firmly in glass jars, then pour a salt brine solution over the parsnips and cover the jar. Let stand at room temperature two to three weeks and then store in the refrigerator.

Parsnips may be frozen as cubes or as a puree. Cut the roots into ½ inch cubes. Parboil or steam for about three to five minutes. If boiled, drain off the water. Cool quickly by blanching in ice water, pack tightly into containers, remove all air if possible and freeze. Parsnip puree should be fully cooked, pureed in a food processor and well cooled before freezing. Frozen parsnips will keep about 10 months.

Like many vegetables, parsnips can be dehydrated. They can be salted or spiced and eaten as vegetable chips or added to soups and stews. Wash the parsnips, slice as thinly as possible and dehydrate until crisp (they’ll snap when bent, like a potato chip). Store in tightly sealed plastic bags or glass jars to keep them dry.

Parsnips also store well in a root cellar between 32 to 40°F (0 to 4°C) and 95% relative humidity. Cut off the tops prior to storing the roots, but don’t wash roots. Just brush off loose dry soil. Store in wooden boxes filled with damp sand, sawdust or peat moss for insulation. Keep away from apples or pears – they give off gases that make parsnips bitter.

Except in very cold areas, parsnips can be stored right in the garden. The soil temperature should be kept between 35 and 40°F (2 and 4°C). A mulch of leaves, straw or hay 12 inches thick provides good insulation. The mulch should cover the rows plus 18 inches on either side. Harvest any time before new growth starts in spring.